Dugger In The Hearts Of South Korean 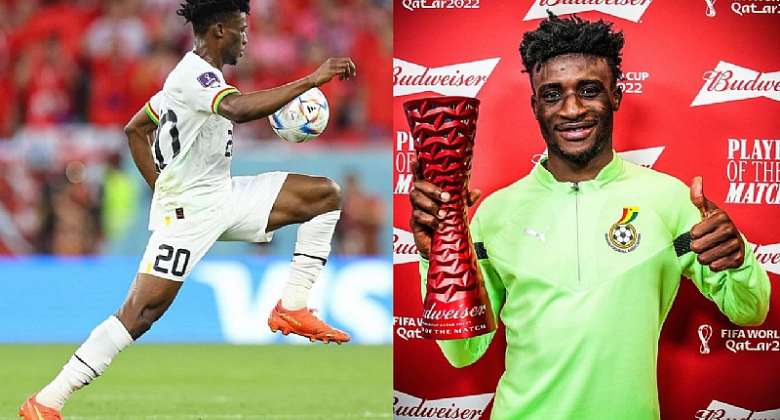 The 2022 FIFA World Cup in Qatar opening match for the Ghana Black Stars was unbearably painful as the last minute goal opportunity missed by Inaki Williams was a mumble to catch which resulted in a squeaky “three three” chance.

Ghanaians can now confess, “God heard our cry” because Portugal’s first World Cup goal in Stadium 974 was not a goal. The second goal was our nightmare and the third goal was initially perceived to be an offside.

The second World Cup game of the Black Stars against;

I. Hwang (not related in anyway to Aisha Huang, the Chinese charged with mining without a valid license and engaging in the sale and purchase of minerals without a permit in Ghana)

H. Son, (oops) I mean the South Korean counterpart in the group stage is not the end of the journey but the “star boy” Mohammed Kudus has won the hearts of the many Ghanaians with his skyrocketing performance on the field.

The Black Stars of Ghana eased three goals past two of the Taegeuk Warriors of South Korea in what AFC Ajax would term as the “Kudus Dream”.

You know what? Many football lovers, especially in Ghana would have acted the same way as the thirty year old Tottenham forward, Son Hueng-min (crying mercilessly). The fun part is a Ghanaian “coach” was captured in a video taking pictures with him after the defeat. Hahahaha! That is the beauty of the game.

The point I want to make is, social media users would have “gone mad” at FIFA if the American referee (Ismail Elfath) in our first match against our former colonial masters (the Portuguese) had replicated himself in the English professional football referee (Anthony Taylor). Besides, Coach Otto Addo has apologized to FIFA on his first post WC match remarks against Portugal and the five times Ballon D’Or winner (who is currently a free agent) Cristiano Ronaldo. Globally regarded as G.O.A.T., He is the only male player to score in five World Cup tournaments, just one beyond Miroslav Klose of Germany.

After a thrilling performance and cheerful moments of many Ghanaians across the world, the Star Boy of Black Stars (Kudus), goalkeeper Zigi, defender Salisu and “darling boy” Jordan Ayew were the main contenders for player of the match on social media. Without needing a seer to predict, the official Man Of The Match (MOTM) was awarded to Mohammed Kudus.

Below are some comments captured on social media about the Stars:

Patrick Fynn (Facebook user, Medical Practitioner) posted, “we owe Jordan Ayew an apology”. According to Fynn, watching Ghana-Korea match has reduced life expectancy of the average Ghanaian by five point eight years (5.8 years)”. The comment follows after the country’s number nine, Jordan Ayew delivered two superb assists to Mohammed Salisu and Kudus who made fortunes out of it in the 24th and 34th minutes.

This is how Kudus’s brace was reported worldwide;

@espnuk: “Mohammed Kudus has never been short of confidence”.

@john dramani mahama (via Facebook): Congratulations to the Black Stars for this relieving and vital victory against South Korea. This win sets the stage for our next game against Uruguay; No room for complacency!”.

@yayrakoku shared a 5-goal-meme thriller on the reaction of a South Korean fan.

@nana addo dankwa akufo-addo: “Kudos to the Black Stars. Hard fought, but thoroughly well-deserved victory against South Korea. Proud of the entire team and the unalloyed support given to them by all Ghanaians. Now to the final group stage (REVENGE) match against Uruguay”.

The 68th goal scored by Mohammed Kudus will forever haunt the Yoon Suk-yeol (President of Korean) men should they be defeated to Portugal in the last round of the group stage match on Friday December 2, 2022 at the Education City Stadium, same time Ghana faces main ‘rivals’ Uruguay at the Al Janoub Stadium in the Group H.

A red card was shown to the Korean coach seconds after the final whistle was blown.

The best foot forward for the Ghana Black Stars ahead of the match is Mohammed Kudus. Do you agree? Why?