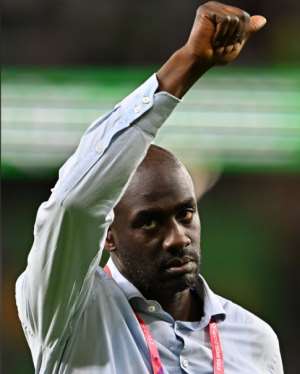 Ghana coach Otto Addo said on Monday he is not the kind of guy who thinks too much about revenge.

But payback will almost certainly be on the minds of many supporters when the Black Stars take on Uruguay in their final Group H clash on Friday, a match that will help determine who advances to the World Cup knockout stage.

A bitter and controversial quarterfinal defeat at the hands of Uruguay, or at least the hands of Luis Suarez, at the 2010 South Africa World Cup remains one of Ghana's most painful sporting moments.

Those memories are likely to come flooding back when the Black Stars run out onto the pitch at Al Janoub Stadium.

"It will be very difficult but I am confident to know that we can win this game," said Addo after his men claimed a thrilling 3-2 decision over South Korea. "I'm not a guy that thinks much of revenge.

"It was really, really long time ago that this incident happened and I am a strong believer if you don't seek too much revenge on these kind of things sometimes you get the blessings."

A long time ago perhaps but still not long enough for many Ghanaians to forget the image of Suarez using his hands to clear away Dominic Adiyiah's header and what surely would have been the extra-time winner.

Suarez was given a red card for the foul but that would not be the end of the heartbreak for Ghana as Asamoah Gyan missed the resulting penalty and the Black Stars eventually suffered a crushing 4-2 loss in the penalty shootout.

Addo pointed out that it is not only his team and approach that will be different this time, but that it will be a completely different Uruguay side as well.

One thing that hasn't changed is Ghana's attacking philosophy and Addo will, as always, rely on an explosive offence that has generated five goals in two games.

"It is a different approach, a different team," said Addo. "They have very good strikers, lots of experience and they are a very compact, very good team.

"It will be very difficult just like every match.
"We said before the tournament started every game will be on edge, and we have to be at our best to beat them."