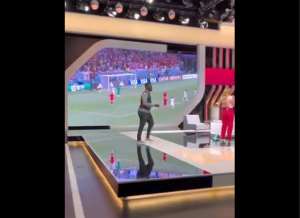 Asamoah Gyan could not hide his excitement following Ghana's win over South Korea on Monday.

Mohammed Kudus and Mohammed Salisu scored the goals as the four-time African champions picked up their first three points of the tournament.

The 37-year-old who is doing punditry on SuperSport could not keep his composure while the game was about to end.

After Referee Anthony Taylor blew his whistle, Gyan screamed and hugged his fellow pundits after the game.

Ghana now has three points and will take on Uruguay in their third group game on Friday at the Al Janoub Stadium with kick-off at 15:00GMT.