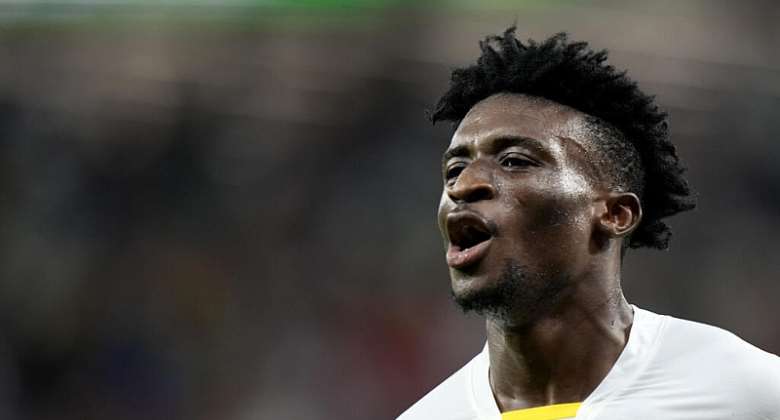 Mohammed Kudus bagged a brace on Monday as Ghana baffled and ultimately battled to a pulsating 3-2 victory over South Korea at the Education City Stadium in Doha.

South Korea were all over Ghana in the opening 20 minutes of their Group H game forcing seven corners as their intricate passing threatened reward.

Ghana skipper André Ayew tried to establish a bridgehead in midfield but South Korea weaved their way around the veteran and Thomas Partey.

The intricacies were rendered redundant though when Ghana made the breakthrough in the 24th minute.

Hwang In-beom chopped down Jordan Ayew on the left hand touchline and the Ghana striker got up and stood over the ball for the ensuing free-kick.

Kudus joined him and then ran over the ball allowing Ayew to swing over the kick. Mohammed Salisu poked home in the ensuing melee.

The strike - against the run of play - frazzled the South Koreans. Woo-Young Jung went into the book of referee Anthony Taylor for haulng down Kudus as he steamed towards the South Korea penalty area.

But just after the half hour, Kudus was on the scoresheet. Jordan Ayew swung over a cross from the left and the Ajax midfielder trotted in between Jin-Su Kim and Young-Gwon Kim to glance a header past goalkeeper Seung-Gyu Kim.

It was that easy. But with only the Ayew brothers having experience of a World Cup match, the question for Otto Addo's players was could they maintain their composure in the second-half?

Gue-Sung Cho injected doubt just afer the restart with a header that forced Ghana goalkeeper Lawrence Ati-Zigi into a flying save.

But after 58 minutes Ati-Zigi had no chance. Cho sneaked in front of Salisu to head the ball into the goal and halve the deficit.

And three minutes later, Jin-Su Kim atoned for his listlessness in Kudus's first goal with a sumptuous cross from the left that Cho headed in for the equaliser.

After neat work from Partey to steal some space in midfield, Gideon Mensah was set free down the left wing, he sent the ball to an unmarked Inaki Williams whose scuffed shot for goal fortuitously took out three defenders as it moved sideways into the path of Kudus, who saved his teammate's blushes by coolly steering the ball into the right hand corner.

Having squandered a two-goal lead in three minutes, how long could Ghana hold on to a slender advantage?

The answer should have been 16 minutes but Jin-Su Kim thrashed over the bar despite having time to pick his spot in the goal.

The end was an echo of the debut albeit far less elegant. South Korea dominated possession but rather than cunning lines and angles, it was salvoes into the Ghana penalty area hoping for fruits from the wonders of Cho's head or Son's deft footwork.

Ghana held out to relaunch their bid for a place in the last-16 for the first time since 2010.

With the defeat, South Korea's destiny was taken out of their hands. To progress, they will have to hope Portugal and Uruguay draw in Monday night's late game and then bank on Uruguay beating Ghana while they see off the Cristiano Ronaldo show in the final phase of Group H games on 2 December.

In the early game in Group G at the Al Janoub Stadium, Cameroon came from 3-1 down to draw 3-3 with Serbia.

The top two - Brazil and Switzerland - meet on Monday night at the Stadium 974.