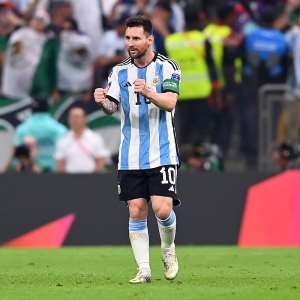 Argentina recorded their first win of the 2022 FIFA World Cup on Saturday as Lionel Messi inspired his teammates to a 2-0 win over Mexico.

The South American country suffered a shock 2-1 defeat to Saudi Arabia when they kicked off their Group C campaign in the ongoing global showpiece in Qatar.

Today, Argentina returned to action hungry for a win to avoid what would have been a catastrophic showing at the World Cup.

Although the first half of the contest would end in a goalless stalemate, Lionel Messi put up a magical display after recess to lead his country to victory.

In the 64th minute of the second half, the world football great scored after he combined with former Real Madrid superstar Angel Di Maria.

Going on to play 90 minutes, Lionel Messi finished the game as the top-rated player with a score of 7.9.

Messi did not only score the decisive opening goal for Argentina but he also provided the assist for Enzo Fernandez in the 87th minute to seal the 2-0 win against Mexico.

Thanks to today’s victory, Argentina's hopes of progressing to the knockout stage of the 2022 FIFA World Cup are alive.

A draw in the final group game against Poland could be enough to qualify Lionel Messi and his mates for the Round of 16 depending on the result of the Saudi Arabia v Mexico game.