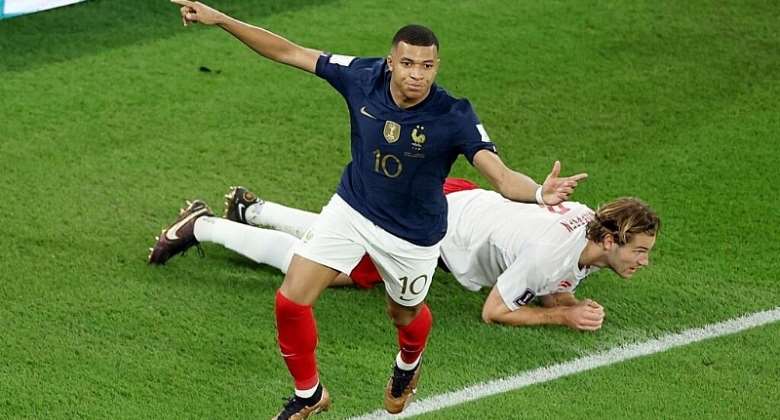 France became the first team to qualify for the last-16 at the World Cup in Qatar on Saturday night following a 2-1 win over Denmark.

Kylian Mbappé scored the opener at the Stadium 974 just after the hour mark.

The Paris Saint-Germain star swapped passes with Theo Fernandez down the left and poked Fernandez's cutback through two defenders and past the Denmark goalkeeper Kasper Schmeichel.

It was due reward for France's adventure.
Denmark, who drew their opening game with Tunisia, responded within minutes.

Christian Eriksen swung over a corner from the right, Joachim Andersen flicked the ball across the goalmouth and Andreas Christensen nipped in front of Adrien Rabiot to power a header past the France goalkeeper Hugo Lloris.

Surge
Four minutes after the equaliser, Lloris had to be alert to push away Jesper Lindstrom's snap shot from the edge of the penalty area.

But France regathered their force and pushed for the winner.

Rabiot attemped to atone for his sloppiness for the goal with a spectacular scissors-kick on a cross from the right wing. But the attempt flew over the bar.

But Denmark's luck ran out four minutes from time. Antoine Griezmann swung over a cross from the right and Mbappé muscled in behind Rasmus Kristensen to bundle the ball over the line.

Not the most stylish from his growing portfolio of wonder goals but nonetheless celebrated.

While France can nurse their wounds and explore different tactics against Tunisia in their final game in Group D, Denmark - one of the teams expected to go deep into the tournament - must beat Australia on Wednesday afternoon and hope Tunisia, who lost 1-0 against Australia on Saturday afternoon, draw or lose against France.

If you need cheap oil you don’t trade gold; take off taxes –...
32 minutes ago

2024 election: NPP struggling to come up with campaign messa...
32 minutes ago