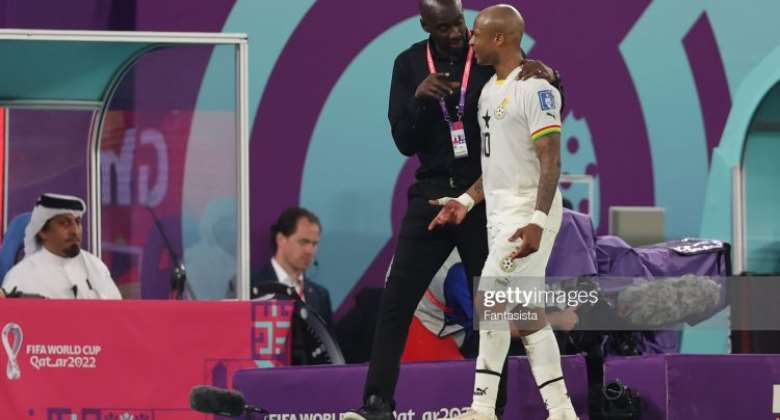 Ghana coach, Otto Addo has explained why he took off Andre Ayew, just four minutes after he scored Ghana’s equaliser in their World Cup game against Portugal on Thursday.

Ayew scored from Kudus Mohammed’s cross in the 73rd minute to make it 1-1 after Ronaldo had broken the deadlock.

Four minutes later, Otto Addo brought off Andre, a decision that has been criticized by many Ghanaian football fans.

Ghana conceded immediately after the substitution; Ayew could be seen celebrating with his teammates on the bench before realising Portugal had scored.

After the game, Otto Addo was questioned on his decision to sub off both Andre and Kudus, who were, by far, Ghana’s best attacking threat in the game.

Addo explained his decision at the post-match presser, stating that the yellow card Andre picked up earlier in the game played a big part in the call.

“It was a tactical change, he had a yellow card. I was a little bit afraid that he couldn’t go into the duels how I wanted him to. So I took him off to bring in a fresh player. This was the reason,” he said.

Otto also rejected suggestions that the decision to take off Andre influenced the result.

“I don’t think it had a big impact because, at that moment, it was 1-1. The game was hectic, we made a few mistakes which allowed the second and third goals [to be scored]. We had to close the lines,” he added.