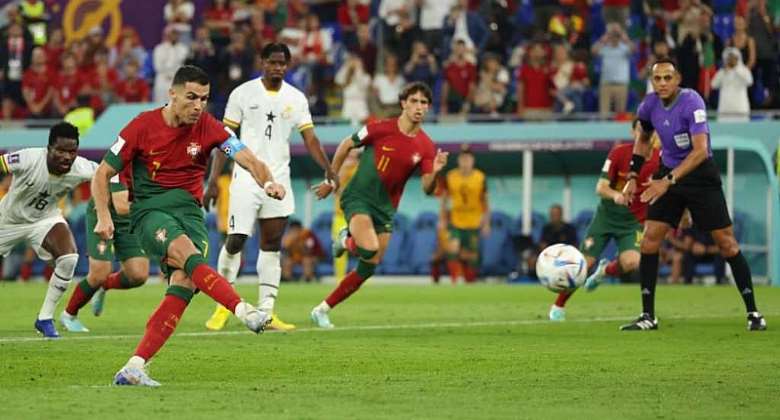 The Black Stars put up a strong performance on Thursday evening but Ghana lost 3-2 to Portugal.

In what was a Group H encounter, Ghana defended solidly for 45 minutes to stop Portugal from getting on the score sheet.

Unfortunately, the story changed in the second half when the defense of the Black Stars suffered from a lack of concentration in key moments.

First, though, a dubious penalty kick awarded to Portugal was converted by poster boy Cristiano Ronaldo to give Portugal the lead.

While Andre Ayew will equalise from close range in the 73rd minute to draw Ghana level, the team subsequently lost concentration as the opponent capitalised to score twice in quick succession through impressive strikes from Joao Felix and Rafael Leao.

Despite a late goal from Osman Bukari in the 89th minute, Ghana could not find the final goal to restore parity to earn a point.

For Portugal, the match stats as demonstrated below show the team did enough to bag the maximum points.

Following the narrow defeat, Ghana is bottom of the Group H standings while Portugal goes top.

Ghana youngster Mohammed Kudus finished the game as the standout player for the Black Stars with a high rating of 7.4. Meanwhile, the top-rated player after the 5-goal thriller is Portugal’s, Bruno Fernandes.

Ghana after the defeat today must now prepare for the next Group H match against South Korea.

That game is scheduled to be played on Monday, November 28, at 1pm.