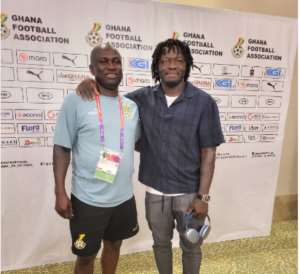 Black Stars legend, Sulley Muntari has ironed out his differences with Moses Armah Parker after the misunderstanding that occurred during the 2014 FIFA World Cup.

Moses Armah Parker, who was a member of the Black Stars management committee had a heated argument with Muntari.

However, the former AC Milan and Inter Milan ace slapped the Medeama SC boss in the course of the argument.

This emerged after the appearance fee for the players was delayed whiles the tournament was ongoing.

Ghana subsequently exited the tournament in the group phase with just a point after three games played.

After as many as eight years, the former Champions League winner has approached the football administrator and sorted out the issues.