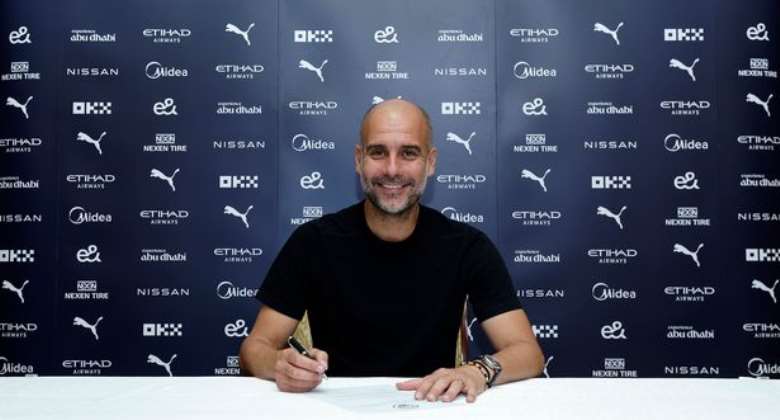 Pep Guardiola has signed a new contract at Manchester City, tying him to the Etihad Stadium until 2025.

The Spaniard, 51, has overseen four Premier League triumphs at City, and declared himself "happy and comfortable" at the club as he eyes more silverware, including the main target of the Champions League.

Guardiola's future had been the subject of some conjecture as his previous contract was due to expire at the end of this season, but meetings with the City hierarchy this week in Abu Dhabi reportedly saw the deal confirmed.

“I am so pleased to be staying at Manchester City for another two years,” Guardiola said.

“I can’t say thank you enough to everyone at the club for trusting me. I am happy and comfortable here. I have everything I need to do my job as best as possible.

“I know the next chapter of this club will be amazing for the next decade. It happened over the last ten years, and it will happen in the next ten years because this club is so stable.

“From day one I felt something special being here. I cannot be in a better place.

“I still have the feeling there is more we can achieve together and that is why I want to stay and continue fighting for trophies.”

"He has already contributed so much to the success and fabric of this organisation, and it’s exciting to think what might be possible given the energy, hunger and ambition that he clearly still has.

“Under his very special leadership our first team has accomplished so much, whilst continuously playing, and constantly evolving, a City style of football that is admired the world over.

"Like every City fan, I am looking forward to what lies ahead.”

Having joined City in 2016, Guardiola will have spent nine years at the club should he stay until the expiry of this new deal.

That would be a big departure from the theme of his previous managerial stints, having only been at Barcelona for four seasons, and Bayern Munich for three.

The stability now seen at the Etihad is in sharp contrast to city rivals Manchester United, whose owners the Glazer family announced on Tuesday that had begun a process of "exploring strategic alternatives", one of them being the potential sale of the club.

With uncertainty over the ownership of Liverpool too, City look in prime position to maintain their place at the head of English football.