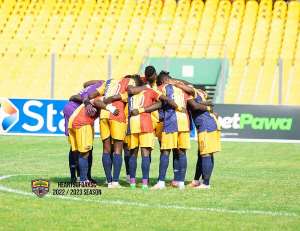 Hearts of Oak are steadily climbing the Ghana Premier League standings on the back of the team’s slow start to the 2022/23 league campaign.

Today, the Phobians locked horns with Accra Lions FC in a matchday seven encounter of the league season.

In a game played at the Accra Sports Stadium, Hearts of Oak put up an outstanding performance that saw the team lead by a goal to nil at halftime.

Unfortunately, Gladon Awako who scored with a thunderbolt strike in the 22nd minute was given the marching orders six minutes later when he had an altercation with the centre referee following a bad foul.

Despite playing the entire second half with 10 men, Hearts of Oak still did enough to deserve the maximum three points.

First, Salifu Ibrahim equalised in the 48th minute before an injury-time strike from Benjamin Yorke sealed a delightful 3-1 win for the league giants.

For Accra Lions, the team netted the consolation goal through Seidu Bassit in the 79th minute.

Courtesy of Hearts of Oak’s win today, the team has climbed to 6th on the Ghana Premier League table with 12 points.