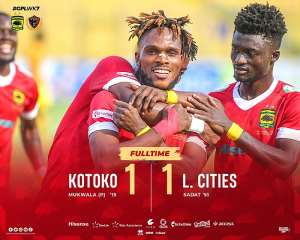 The Porcupine Warriors today hosted the matchday opponent at the Baba Yara Sports Stadium in Kumasi.

In a game that produced just two goals, the hosts took the lead after 15 minutes when the team was awarded a penalty kick.

Striker Steven Mukwala stepped up to take the sport kick and scored to the delight of the fans from 12 yards.

Although Asante Kotoko will take the lead into the first half break, the story would not be the same at full time.

A spirited performance from Legon Cities FC saw the visitors equalize in the 51st minute through an effort from Sadat Mohammed.

Despite the efforts of the two teams to get the crucial second goal, they all failed and had to settle for a 1-1 draw at the end of the 90 minutes.

The result means Asante Kotoko will be third on the Ghana Premier League table at the end of matchday seven.