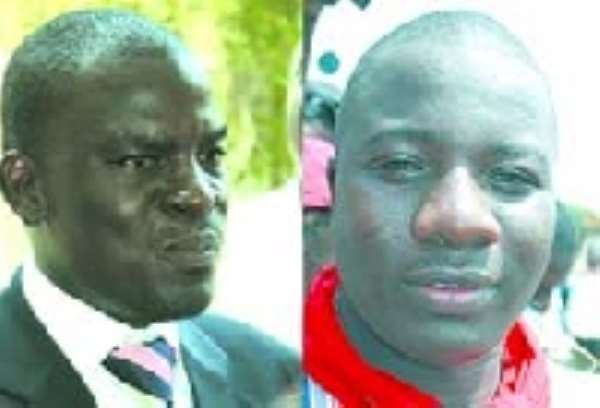 A group calling itself the Coalition of Concerned Youth and Aspiring Assembly Persons of Tamale and Yendi has challenged the three most famous National Democratic Congress (NDC) Members of Parliament (MPs) to as a matter of urgency withdraw the Supreme Court case involving the MPs and the Electoral Commission (EC) that had withheld district and unit committee level elections in the two areas.

The three youthful NDC MPs are: Haruna Iddrisu of Tamale South, Lawyer Inusah Fuseini of Tamale Central and Mahama Ayariga of Bawku Central Constinuencies. According to the group, the MPs were only pursuing the case to satisfy their own political and selfish interest but not in the best interest of the entire electorates of Tamale and Yendi.

“Their action is not in the best interest of the electorates or even some incumbent assembly members. They only want to score cheap political points and to also let the public hear their voices,” they asserted.

Speaking to The Chronicle after a press conference they organized in Tamale to demonstrate their disappointment at the withholding of the elections in the two districts, the Coalition members assailed Mahama Ayariga, MP for Bawku Central for carrying a load he did not own (showing keen interest in a case far from his home). They vehemently challenged the MPs, literally describing them as freeloaders because they have not repaid the huge chunk of money and other resources they had channeled into their campaigns, and charged them to repay if they still wanted to pursue the case at the Supreme Court.

Continuing, they said: “It is instructive to note that this is not the first time Tamale and Yendi have had to come from behind in District level elections. During the Konkomba war, district assembly elections were ran late in most parts of Dagbon but this did not call for the extension of time for those assemblies in the subsequent elections.”

The youth added, “Bawku has had similar problems yet elections there were ran with the rest of the country. Again areas like Savelugu/Nanton, Tolon/Kumbungu and Zabzugu/Tatale districts are all in Dagbon but they have held their elections peacefully.” According to them, against this background, “If the honourable MPs do not have any diabolical intention, they should see to the withdrawal of the case from the Supreme Court to pave way for the elections”.

The Coalition is led by Rahid A. Salam as Chairman, Mohammed Sulemana, spokesperson, Hajia Sana Sule, women's leader, Salifu Nnimbawula Shalla as secretary and Razak Gombilla as a key member. In the view of the Coalition, the three MPs pursuit of the case might attract serious political consequences for them in future.

The Coalition asserted that they (present assembly members) had failed to prevail upon the Presiding Member for Tamale Metropolitan Assembly, Hannan Gundadow to hold general assembly meetings required by the constitution:

“Even though the standing orders demand that every assembly organizes at least three of such meetings in a year, those assembly members who are seeking for court interpretations to satisfy their so-called rights have failed to ensure that the meetings were held to enable them bring development to their communities.

“It is a mockery that the same assembly members who have failed to organize just one ordinary session for a whole year still find it fit to be in the assembly,” they charged.

The Coalition noted that the few development projects being carried out in the Tamale Metro were done without consultation with the assembly members.

The aspiring assembly members argued that the Minister for Local Government and Rural Development ordered for the dissolution of all assemblies before September 20, 2006 and thus did not understand why Tamale Metropolitan and Yendi District Assemblies have turned deaf ears to the call. They said that the Tamale and Yendi assemblies needed a new crop of representatives who would pursue the concerns of the people effectively.

They insisted that if the MPs however failed to withdraw the matter from the Supreme Court they would advise themselves accordingly.