The quiet rise of fearless Essien 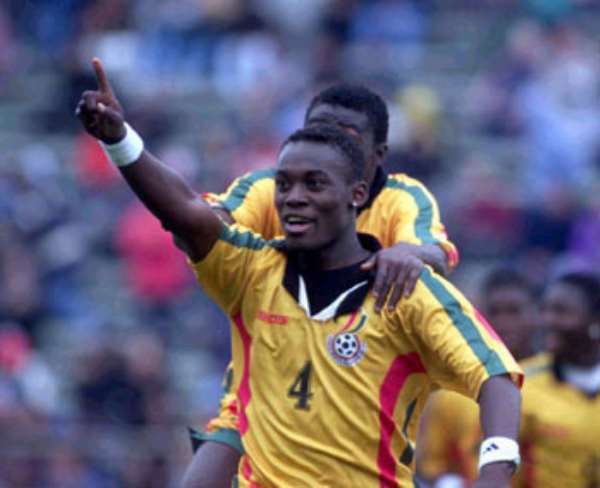 The midfielder tells Jamie Jackson about moving from the dirt pitches of a small town in Ghana to Champions League and World Cup campaigns.

Michael Essien has been the driving force of Chelsea this season, underlining why Manchester United were so keen to buy him, and why Roman Abramovich ensured he arrived at Stamford Bridge in August 2005 by paying Lyon £24.4m for the midfielder.

He is nicknamed Bison because of a frightening fearlessness and strength; Dietmar Hamann and Tal Ben Haim, both on the business end of tackles by the Ghanaian last season, can vouch for Essien's impact on the football field. When Jose Mourinho's team play Barcelona at the Nou Camp on Tuesday, Essien will hope to be the pivotal force he was during his team's 1-0 victory in the match against the Spanish club at Stamford Bridge a fortnight ago.

What is Essien's assessment of Barcelona's qualities? 'They have pace and pass the ball well,' he says, in his quiet manner. Was the win against them at Stamford Bridge Chelsea's best performance this season? 'Yeah, it was a very good one. I think we deserved the win.' Are they the best team he has played in the Champions League? 'Mmm... Yeah,' he offers shyly.

So far, Essien has performed superbly in both the Claude Makelele holding position and more advanced, on the right of Chelsea's narrow midfield three. He names Patrick Vieira and Roy Keane as his favourite players but is reluctant to choose a preferred position, saying: 'It is no problem for me where I play.' Anthony Baffoe, a former Ghana player and now international public-relations manager of the national team, believes that Essien can play anywhere in the midfield. 'He is a No 6, but also an 8 or 10 because when he breaks down the play, it can also start with Michael.'

Essien is unfailingly polite and friendly. But, in contrast to his visible on-field style, he is a reluctant speaker who lives quietly away from the game, saying he that 'never reads newspapers and just watches football' at his home near Chelsea's Cobham training ground. Tony Amofa, a Ghanaian football writer who has known Essien since he broke into the national under-17 team, confirms this. 'Michael is an intelligent lad. If he had his way he would just play football. If he knows you, though, he is friendly. When Lyon played Manchester United in the Champions League in 2004 at Old Trafford he had not seen me for two years. After the final training session, he wanted to bring Sylvain Wiltord, Juninho Pernambucano and Mahamadou Diarra to my flat in Stretford. He can be a journalist's nightmare, but this is because the press is ferocious in Ghana.'

Essien's approach, then, is understandable and seems as smart as his rise from Awutu, a town of about 1,000 people in central Ghana. 'I started loving football when I was eight and played for the school team there,' he says. 'But there weren't really any grass pitches. We would play anywhere with space, really, whenever we had time and a ball.' Essien played barefoot. Did he always have a football? 'Yes,' he says. 'My mum always brought me back a ball. I love her very much, she has done everything for me.'

We are in the office of Caroline McAteer, the former representative of the Beckhams, who is now employed by Essien's agent, Fabien Piveteau, to look after his commercial and media relations. After a handshake, McAteer, Piveteau, a former Monaco goalkeeper under Arsene Wenger, and Essien's girlfriend leave us alone. Throughout our conversation the Ghana player refers to his mother, Aba, as the defining influence on his life. Essien has four elder sisters. A brother, Paaquiche, 'died [aged 15] before I was born and had a chance to see him'.

His father, James, is not part of the family now and has other children with various partners. He was an influence, though, as Essien grew up. 'I was 10 the first time my dad took me to watch a match. It was in the Ghana Premiership. Hearts of Oak played Kotoko [the country's two premier clubs] and Hearts won 1-0.' Essien says he still sees his father, but their relationship is complex. Before this summer's World Cup, an angry James walked into the studios of Adom FM, a radio station in Tema, an industrial city 65 miles from the capital Accra, intent on complaining that Michael had forgotten him since he became successful.

But Kwame Baah-Ngakoh, Adom's sports editor at the time, did not allow him to speak on air. 'Essien's father was accompanied by one of his daughters, a sister of Michael, who was helping him to walk as he is an old man who must be in his sixties,' says Baah-Ngakoh, an economics lecturer at the University of Ghana and now head of communications for Kotoko. 'I recorded an interview with the father, but I talked to many of Michael's family and people who know the situation and the truth is that his father, like many people here, want a piece of him. It is difficult for the boy.'

Baah-Ngakoh decided not to broadcast the interview. Told of the incident, Essien appears surprised and says: 'Oh really? I didn't know that.'

Essien attended a Catholic school in Awutu until he was 12 and the family moved to Accra. At the time Aba baked bread for a living. Two years after the move Essien won a scholarship to St Augustine's in Cape Coast, a city 120 miles west of the capital. 'I was there for three years but did not start believing in myself until I was called into the national under-17s.'

With his mother's approval, Essien signed with Piveteau, whose connections at Bastia, where he had also played, allowed the then 17-year-old a trial with the Corsican club. 'As a kid I always wanted to play in Europe,' he said. 'I said to myself, "This is my chance, I really have to take it." I met one Ghanaian boy, Prempeh, and we were together all the time. I was really happy then because it was difficult to find someone who spoke English.'

Essien arrived in 2000 and left three years later for Lyon, where he won successive French championships and played in two Champions League quarter-finals, before joining Chelsea. What are the differences between Europe and Ghana? 'Well, Ghanaians and English people enjoy football the same. I love England [but] the culture is the difference,' he offers, before agreeing that Europe can lack the chaos of Africa. 'I still feel Ghanaian, but my mentality is more European.'

In 2008, Ghana will host the African Nations Cup. Baffoe, who missed the decisive penalty against Ivory Coast in the shoot-out of the 1992 final, the last occasion Ghana reached that stage, has no doubt about Essien's importance. 'He is in the rank alongside Abedi Pele [man of match for Marseille when they won the 1993 European Cup] as Ghana's best ever player. He is world class, irreplaceable and goes out to win. He will be vital for us.'

Quizzed about his country's chances, Essien laughs. 'We'll see what happens. People were talking a lot about us after the World Cup [when Ghana were eliminated from the last 16 by Brazil, a match for which Essien was suspended]. It's up to us to see what we can do.' Can Ghana win it? 'Why not?'

As for Tuesday and Barca, Essien knows Chelsea have to keep it tight. 'We have to defend well, then after that, we'll have to think how to attack.' Having won their first three group games, a point should guarantee progress. Could this be Chelsea's year in the Champions League? 'Once you get to the knockout stage anything can happen.'

Next year it will be half a century since Ghana became the first African country to gain independence from the British empire. Is he aware of this? 'No,' he says, before relaxing for the first time and flashing a smile. 'I don't know about that, but it is certainly good to hear.'