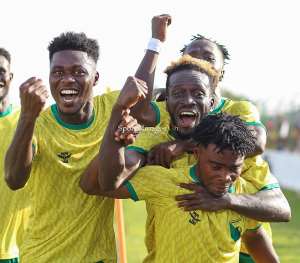 Bibiani Gold Stars’ prolific striker, Ibrahim Laar was on target again for the team on Sunday and helped the side to cruise past Samartex FC with a 3-0 win in the Ghana Premier League.

The forward today started for his team when they played as guests to the matchday 6 opponent of the ongoing league campaign.

On the matchday, Yahaya Abdul Rahman scored in the 13th minute to open the scoring for the visitors.

Later in the 67th minute of the second half, Ibrahim Laar had his chance and equalized with a fine strike to double the lead for Bibiani Gold Stars.

Despite the efforts of Samartex FC, the team could not get back in the game no matter how many times the team changed tactics.

Eventually, in the 80th minute, Yahaya Abdul Rahman grabbed his second goal in the match to seal a delightful 3-0 win for Bibiani Gold Stars at the end of the 90 minutes.

The win today has propelled Bibiani Gold Stars to 9th on the Ghana Premier League table.

Meanwhile, Accra Lions are ending the matchday top of the Ghana Premier League table following a fifth consecutive win of the season.

Being an MP is serious business; the responsibility of a Min...
58 minutes ago