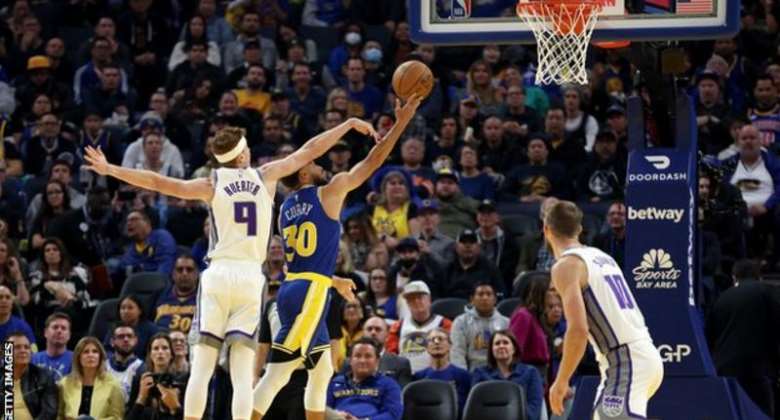 A brilliant display from Stephen Curry inspired the Golden State Warriors to victory over the Sacramento Kings.

Curry scored 17 of his season-high 47 points in the final quarter as the Warriors ended their five-game losing streak with a 116-113 win.

The 34-year-old has scored at least 30 points in eight of the 10 games he has played for the champions this season.

"We know how to do it. I just needed to light the fire a little bit. Whatever it takes to get a win," said Curry.

"There was a sense of desperation coming off that road trip struggling like we did. We still can show that championship kind of grit and competitiveness to pull out a game like that."

Warriors coach Steve Kerr said: "Steph was just breathtaking. He's obviously one of the greatest players of all time.

"He plays so well on so many nights, but this even seemed like something special for him. He just put us on his back."

Andrew Wiggins scored 25 points and Klay Thompson added 16 for the Warriors, who are 12th in the 15-team Western Conference.

Elsewhere, the Milwaukee Bucks' unbeaten start to the season ended with a 117-98 loss to the Atlanta Hawks.

Teenager AJ Griffin came off the bench to score 24 points to set up a comeback victory after the Hawks had trailed 58-52 at half-time.

"Before the game started, the coach said 'believe'. I feel the whole team wanted more," said the 19-year-old.

"It was a great win. We knew the gameplan - just pitch in and make sure we had each other's back."

Giannis Antetokounmpo top-scored with 25 points for the Bucks, who had won their previous nine matches.

The Los Angeles Lakers' poor start to the season continued as they lost to the Utah Jazz for the second time in three days.

The Lakers, who were without the injured Lebron James, are second-bottom of the Western Conference after losing eight of their 10 games so far, including their last three.