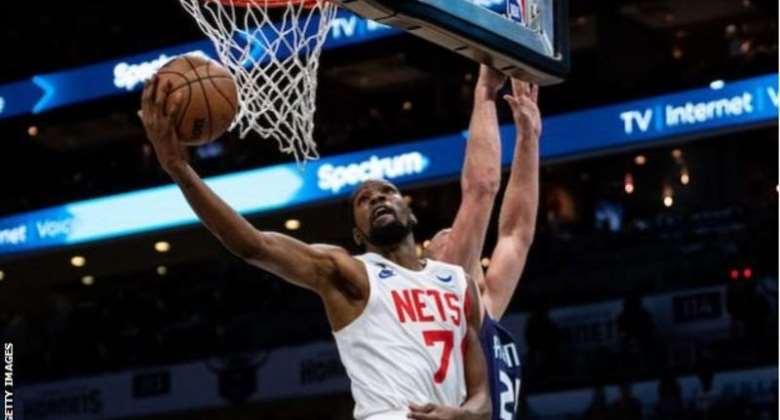 Kevin Durant playing for the Brooklyn Nets against the Charlotte Hornets

Kevin Durant says the Brooklyn Nets have found "a little bit of solace" in basketball as they recorded back-to-back wins following a tumultuous week for the franchise.

After they beat the Washington Wizards on Friday, the Nets came from behind on Saturday to defeat the Charlotte Hornets 98-94.

On Thursday, Brooklyn guard Kyrie Irving was suspended for at least five games amid allegations of anti-Semitism at the end of a week that also saw head coach Steve Nash sacked.

Speaking after the Nets' win in Charlotte, Durant said the week's events were "probably going to be the toughest thing we deal with as a group".

"Having to lock back in and focus solely on the game, I think that we all get a little bit of solace in doing that, just playing the game of basketball, getting that camaraderie, that fellowship with your team-mates, I think that was able to get us through."

Nike suspended its sponsorship deal with Irving after he promoted on Twitter a documentary which contained anti-Semitic material.

He initially defended having shared a link to the film but the 30-year-old later apologised, claiming he is "learning" from what happened.

Durant added: "I just think we rallied around each other. It was a tough week for us. And it's always good to just get back to the game.

"It's good for our character, it's good for the energy of the team and to fight through adversity."

Prior to the weekend's ties, the Nets had lost six of their eight opening games of the season but for the second game in succession, Durant stepped up to top score for his side.

He recorded 27 points against the Hornets, backed up by 21 from Cam Thomas.

Terry Rozier scored 25 points and Kelly Oubre Jr made 18 for the Hornets, who have now lost four games in a row.