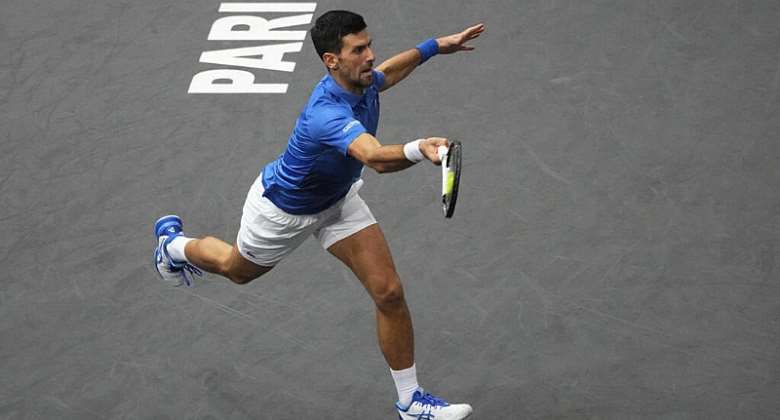 Defending champion Novak Djokovic moved into the semi-final at the Paris Masters on Friday night following a straight sets win over the unseeded Italian Lorenzo Musetti.

Djokovic, who is seeking a record-extending seventh title, raced through the opening set 6-0 in 27 minutes.

There was a huge cheer at the Accor Arena in Bercy when Musetti eventually troubled the scoreboard after 34 minutes of play to make it 1-1 in the second set.

He even hinted at the idea of a match when he broke the sixth seed to lead 2-1.

But the 20-year-old could not capitalise. And Djokovic immediately reeled him in for parity at 2-2.

Two more games went the way of the 35-year-old Serb and after 67 minutes, Musetti - playing in his first quarter-final at a Masters 1000 event – served to stay in the tie with Djokovic leading 5-2.

Task
He at least fulfilled that assignment.
Serving for a slot in the semis, Djokovic quickly notched up three match points and he wrapped up proceedings when Musetti's attempted forehand pass rolled along the ground into the net.

"I was well prepared and I knew what I wanted to do," said Djokovic in his on-court interview.

"The idea was to take away from time him. And it worked well. This was my best match of the week."

The Spaniard withdrew during the second set tiebreak with a muscle problem in his stomach after losing the first set.

"From the beginning until the end I really was sticking to the game plan," said Rune.

"I was playing super aggressive, trying to take every chance I got. I'm super happy with how I managed everything."

In Saturday's semi-final, Rune will play the eighth seed Felix Auger-Aliassime who beat him to claim the Swiss Indoors in Basel last Sunday.

"Felix is serving really well at the moment, so it's really tough to break him," said Rune.

"But I'm going to try to do small changes that I didn't do last time to see if I can stress him a bit more."