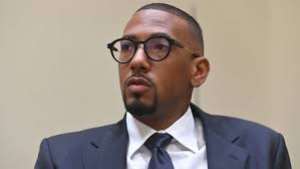 Jerome Boateng did not say a word as he leaves the Court this Wednesday evening. He also silently leaves a young man who asks him for a photo because he is his "biggest fan".

Earlier, the Munich-I Regional Court had handed down what must have been a devastating verdict for him. It not only confirms the sentence for bodily harm imposed by the district court in the first instance last year, it even makes it more severe.

"For us, the facts of the case are more than proven," says Judge Forstner in his reasons for the judgement. The court has no doubt that Boateng beat, injured and insulted his then-partner on a joint Caribbean holiday in 2018, and that a lantern also flew in her direction in the dispute over a card game. Boateng is now even convicted of two counts of assault, in the first instance only one count.

The verdict is probably completely different from what Boateng and his defence lawyers had hoped for. The lawyers had asked for an acquittal.

They assumed in court that his ex-girlfriend had invented and "instrumentalised" the accusations "in the fight for the children" and complained about a prejudgement of their client. Boateng was someone "who was actually convicted before he got up in the morning", his lawyer Peter Zuriel said in his closing argument. "A prominent person cannot defend himself in the same way a normal person would."

His colleague Norman Nathan Gelbart speaks of alleged contradictions in the testimony of Boateng's ex-girlfriend: "When in doubt, give the accused the benefit of the doubt," he says. "In dubio pro reo." (meaning a defendant may not be convicted by the court when doubts about their guilt remain). Judge Forstner replies, "For us, there is no dubious and that's why there is nothing pro reo."

After the verdict, the defence lawyers did not speak. But the lawyer of Boateng's ex-girlfriend, who was a joint plaintiff in the proceedings, did speak. She speaks of a "good decision" and of "David against Goliath" battle that her client had to fight against the rich and famous ex-boyfriend.

She had agreed to the prosecution's requests for a suspended sentence of one and a half years and an additional fine of 1.5 MILLION EUROS.

Public prosecutor's office: the incident is probably "only the tip of the iceberg".

The incident in the Caribbean luxury resort was probably "only the tip of the iceberg", said prosecutor Stefanie Eckert in her closing speech and spoke of a relationship between Boateng and his ex-partner that was marked by violence.

Eckert also criticises the footballer's defence. His lawyers had "thrown mud over the injured party" in the proceedings, says the prosecutor.

Boateng's defence lawyers had emphasised before the pleas that their client's financial circumstances had changed. Advertising partners had cancelled contracts with Boateng - for example for advertising glasses. That is why he currently only has an income from Olympique Lyon, where he is under contract. That is a little more than 240,000 euros net per month, but maintenance costs for his three children are not included. For Boateng's eleven-year-old twin daughters alone, the lawyers calculated maintenance costs of 5,000 euros per month for each child.

Boateng's defence lawyers did their utmost not to let the trial ends on the third day, filed one motion for evidence after the other - and even a motion for partiality against Judge Forstner. He achieved his goal of concluding the trial on Wednesday, hours later than hoped.

Boateng still has the option of appealing the verdict to the Bavarian Supreme Court, a court spokeswoman said.

Court Judge Forstner, tells the defendant to think twice. "At some point, even the defence is at its end," he said at one point during the long day in court.