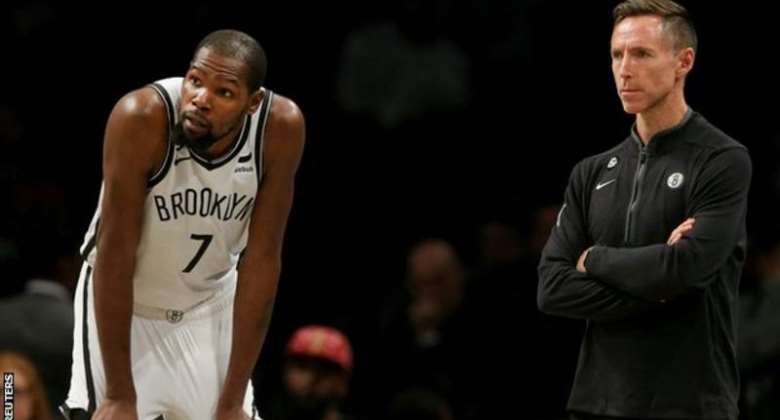 Nash had been with the Nets since 2020

Kevin Durant said he found out about the Brooklyn Nets sacking head coach Steve Nash by seeing it on television.

The Nets played Chicago Bulls after parting ways with Nash and, despite holding a 12-point lead in the third quarter, conspired to lose 108-99.

"I woke up from my nap and turned to my right and saw it [Nash sacking] on ESPN," Nets forward Durant said.

"I was shocked. You're always shocked when a move like this happens, but it's normal in the NBA."

Durant scored 32 points, with nine rebounds and six assists, against the Bulls, who outscored the Nets by 31-19 in the fourth quarter.

"You just get ready for the game," added Durant.
"It's a quick turnaround in the league so you can't think too much about it - but it was on my mind for a little bit."

Nash, who had been with the Nets since 2020, was dismissed after losing five games from seven and assistant coach Jacques Vaughn has taken over as interim head coach.

"I liked working with Steve, I liked the coaching staff," Durant said.

"It was a rollercoaster last few years but the core of it - the basketball - is something we all loved to do. I enjoyed coming to work with Steve.

"We didn't have a healthy team and we didn't play well. That's what happens in the league.

"It doesn't take away from Steve's basketball IQ, or how he teaches the game. It just didn't work out."

Elsewhere, the Phoenix Suns secured a fifth straight victory with a 116-107 win over the Minnesota Timberwolves.

Cameron Johnson scored 29 points for the Suns and shot 7 of 11 from three-point range.

Stephen Curry had a triple double for the Golden State Warriors, with 23 points, 13 rebounds and 13 assists, but it was not enough to stop them losing 116-109 to the Miami Heat.