George Ashie pulls out of big bout in Aberdeen, Scotland 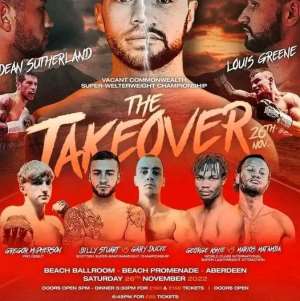 Ghana's George Ashie has withdrawn from a world-class fight in Scotland against Marios Matamba aka The Machine of the Republic of Congo in an international Super Lightweight contest.

The bill is scheduled for November 26, but according to the promoters of George Ashie, they are trying to get him a bigger bout in December.

Ashie has been replaced by another experienced Ghanaian boxer, Maxwell Awuku.

"He has been replaced by Awuku for the fight, we are negotiating some bigger fight in the UK for him next month (December) or Dubai in January or February something big" CEO of Box Office Promotions, Mr. Alex Ntiamoah Boakye told Yours Truly.

Ashie (33-5-1-25KOs) has not fought since defeating Robert Quaye 'The Stopper' in an interesting bout that passes to be Fight of the year, and he looks very hungry for success.

He is the leader of the Ghana Professional Boxers Association and has been engaging the GBA concerning the welfare of boxers. He feels promoters and the GBA must come together to find solutions to the problems of boxers.

Ashie is one of the best boxers in Ghana with a large fan base. His fight against Emmanuel Game Boy Tagoe blemished his career, but he has overcome and moving on.