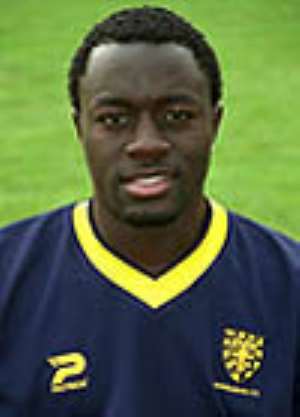 Born on 20th September 1980 at Walthamstow, UK , Patrick agyemang must definitely be rearing to go as he has been included in Coach Dujkovic's squad list for Ghana's International Friendly against Mexico.The pacy 6ft 1in /12st striker who plays for Preston fc (An English Championship Team(English Level 2)) might have almost given up hope of being called up to stake a claim for a spot in the World Cup squad.

His first International cap was against Nigeria on 30th May 2003 and he made a sudden impact by scoring in the 3-1 loss to the Super Eagles. However any dreams of making a break-through in the Black Stars was put on hold and has had to wait for 3 years for his second cap.

So far this season he has made 13 league appearance and came off the bench for 16 other.Has 5 goals so far and is joint top scorer at Preston. He has started 3 FA Cup matches and 1 league game but couldn't find the net.

Ladies and Gentlemen, meet Patrick Agyemang-Black Stars newest striker. One could only pat Dujkovic at the back for giving the young striker a CHANCE to stake for a World Cup spot....yes we are casting our nets wider in the race to get the best strikers for the World Cup.It is now up to patrick to justify himself.

Good Luck to Patrick Agyemang Views expressed by the author(s) do not necessarily reflect those of GhanaHomePage.