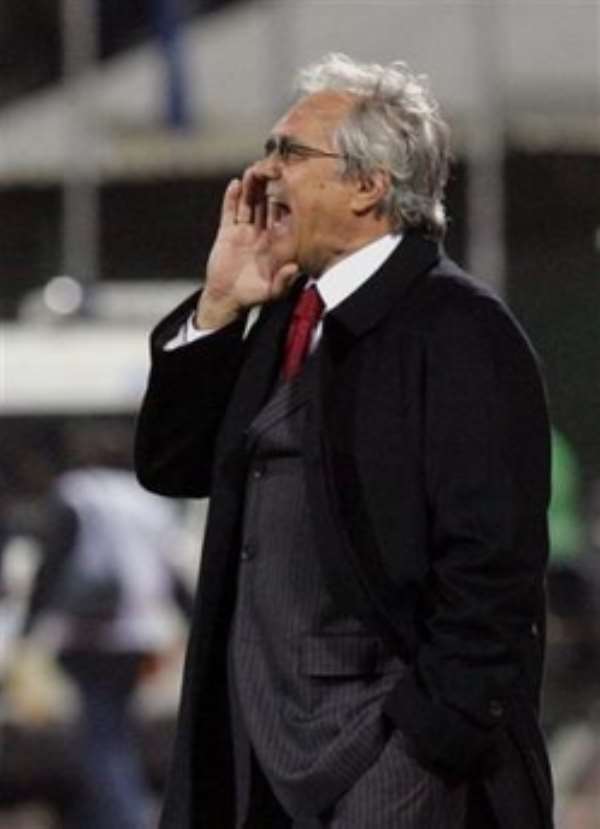 EXACTLY FOUR months back, he was hailed for breaking the jinx of Ghana not qualifying for the World Cup finals, writes Isaac Franklin. At the turning point, when every lion-hearted soccer fan thought it was all over for Ghana's Black Stars in their quest to burst onto the world scenes, he proved the world wrong.

Appointed halfway through the World Cup/CAN 2006 Qualifiers, the Serbian managed to clinch 13 points, without a defeat, to spur Ghana to book its World Cup place, for once.

Consequently, the coach received enviable ovations from Ghanaians, and even, soccer-mad pundits, worldwide.

Not again; Serbian-based coach, Ratomir Dujkovic, is now at the receiving end, for parading a thread-bare team, for the on-going African Nations Cup (CAN 2006) finals.

Obviously, a number of Ghanaians lost their confidence in the thread-bare team, after it succumbed to four successive defeats in its friendly battles, ahead of the African tourney.

The absence of Michael Essien and Sulley Ali Muntari in the team, coupled with a few injuries, hither and thither, was the flimsy excuse given, for the Stars' abysmal performances.

But, of course, Ghana's greatest all-time lethal marksman, Anthony Yeboah, had advised coach Dujkovic to scout for quality players, who could stand in, for the key players in the team, in event of unforeseen occurrences.

Little did he know that, Gyan, Muntari, and Essien would be unavailable for the CAN 2006 championship, with few weeks to the tourney's kick-off.

So soon, heroic coach Dujkovic has emerged a villain to a number of Ghanaians, who insist soccer is the passion of the nation, following his failure to parade a winsome team, for CAN 2006.

“I'm definitely not in the shoes of the coach. But, you see, in soccer, you always have to bear in mind that, players are bound to be injured, Anthony Baffoe, ex-stalwart defender of the Stars told Guide Sports, a few weeks to CAN 2006 kick-off.

“You can't always bank your hopes on your dream selection.

“Tomorrow, someone could be injured, and you would have to replace him.

“That's why we've got more than eleven players in the team. And that's soccer; that's life”, Baffoe, one of Ghana's most illustrious defenders, emphasised.

Sometimes, one can understand the coach's headache, because he seemingly knows little about most of the Stars, particularly slippery forward, Louis Agyemang. Louis' terrific feat could not catch the eye of coach Dujkovic, to prove his worth in the championship, even, when the going was tough for the Stars' squad. In the aftermath of the Stars' elimination from the CAN 2006, by Zimbabwe's Warriors, the whipping boys of the tourney's Group D, some Ghanaians are querying the criteria for selecting players, to form the Stars.

It is believed that, an assistant coach makes the selection, and further submits his 23-man squad to Coach Dujkovic, who then, picks his first team, a phenomenon, which is depriving Ghana of two formidable sides.

It is no surprise, as soccer pundits continue to wonder why utility and talented player, Emmanuel Osei-Kuffour, canny striker, Isaac Boakye, and playmaker, Otto Addo, could be left out of the national squad.

What even, worries the likes of Marcel Desailly, and Abedi Pele, is the non-appearance of a playmaker, as Otto Addo, in the team.

Indeed, should coach Dujkovic fail to learn from the mistakes, which led to the Stars' flop at CAN 2006 finals, to keenly observe players, ahead of the World Cup finals, then, another early shower, would be no surprise.

Despite the Stars' appalling performance at the Nations Cup, the coach is not really worried about that poor show, as he has got his mind focused on the World Cup tourney.

But the fate of Ghana at the World Cup finals would largely depend on how the Serbian coach would make time, to adequately assemble the Stars, to build two different fearsome teams.

As Pele, Yeboah, Desailly, and Baffoe have been touted to bolster the Stars' preparations, ahead of the world campaign, it is expected that, all anomalies would be ironed out, so that, Ghana could lift its name into the soccer stratosphere, timeless.