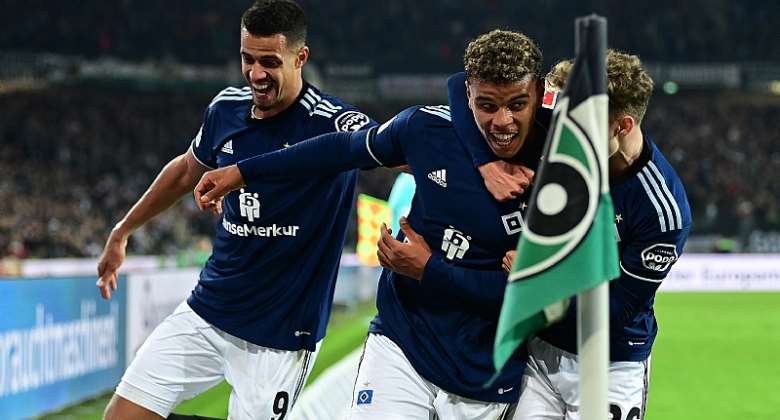 New Ghana attacker, Ransford-Yeboah Königsdörffer was a hero for Hamburg SV on Friday evening as he climbed off the bench to score the winning goal against Hannover 96 in the German Bundesliga 2.

The talented youngster missed out on a starting role today when the team engaged the Matchday 10 opponent due to his national team assignment with the Black Stars which saw him only report to camp two days ago.

In today’s game, a slow start from Hamburg SV gave Hannover 96 the advantage as the home team capitalised to score in the first four minutes through Sei Muroya.

Thanks to the resilient display by the visitors, the team responded 10 minutes later as pressure forced Julian Borner to put the ball in the back of his own net to restore parity.

After the break when the game was at a stalemate, Ghana forward Ransford-Yeboah Königsdörffer was introduced in the 70th minute to bolster the attack of Hamburg SV.

His introduction put the away team on the front foot as the team created numerous chances.

Eventually, in injury time, Ransford-Yeboah Königsdörffer scored with a fine strike to seal a 2-1 win for Hamburg SV to merit the maximum three points.

For his heroics today, the Black Stars newbie earned a high rating of 7.6.

The three points bagged today have propelled Hamburg SV to the summit of the German Bundesliga 2 table as the club continues the fight to secure promotion at the end of the 2022/23 football season.