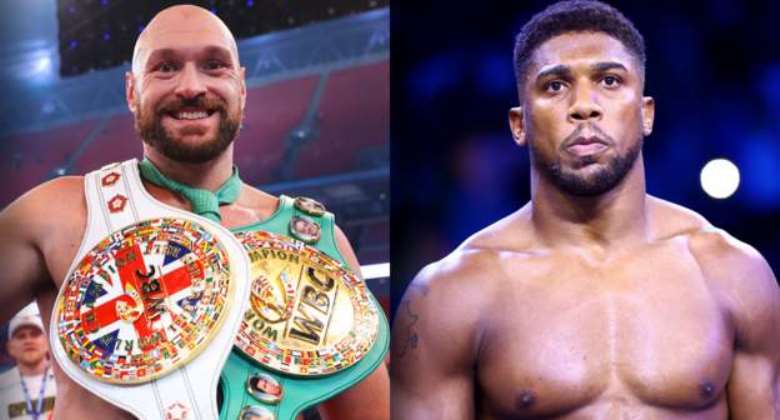 Tyson Fury has urged Anthony Joshua to "give British fans what they want" and sign a contract for a heavyweight world-title fight in December.

WBC champion Fury, 34, had given fellow Briton Joshua, 32, an ultimatum to sign by Monday, but said on social media he has extended the deadline to Thursday.

"The ball is in your court, everything is done," said Fury.

"We have [broadcasters] BT, DAZN and ESPN all on the same page, they're happy with everything.

"If you have any dignity and pride about you, you'll get this contract signed today.

"I'm chucking you a massive bone but I know I can punch your face in so I'm willing to give you an opportunity. Let the British fans have what they want."

In an interview with BBC Radio 5 Live, Hearn responded by saying he had "absolutely no idea" what Fury was going to do next.

"I don't think we're a million miles away but I don't know really whether Tyson Fury wants this fight," added Hearn.

"I think he just wants to fight Manuel Charr on 3 December, but I don't think anyone else wants that fight. Hopefully we can keep moving forward.

"We'll carry on and while there's hope, we won't stop trying.

"From either side, I can't fault the process of trying to get done the biggest fight in British history. The only thing I can fault is we don't really know where we stand.

Joshua's team have already verbally accepted Fury's offer of a 60-40 purse split for a fight on 3 December, and television executives from BT Sport and streaming service DAZN were scheduled to meet on Monday.

Last month, Joshua failed to regain the WBA (Super), WBO and IBF belts in a rematch with Oleksandr Usyk, losing on a split decision.

"We are the B-side in this, whether right or wrong, because we accepted that position as challenger," added Hearn.

"We also accepted a date that was quite frankly to a disadvantage to Anthony Joshua, because he's just coming off a fight.

"But he was prepared to do it and he's still prepared to do it. We all really want to get it done. But I don't understand the deadlines that keep popping up on Instagram when these deadlines are not being applied in negotiations, just on social media. It doesn't really help anyone."

Fury's promoter Frank Warren says he does not know what is preventing the contract being signed.

"I, for the life of me, don't know what is holding this up. At the end of the day, he [Joshua] is the boss. Instruct your team if you want the fight.

"I want them to pick up the phone, them to get the contract across, instruct their lawyers to speak to our lawyers and get it over the line. It's not rocket science."

Ukrainian Usyk, 35, said he plans to have three more fights before retiring, including a unification bout with Fury, but Joe Joyce is now the mandatory challenger for Usyk's WBO title after beating Joseph Parker on Saturday.