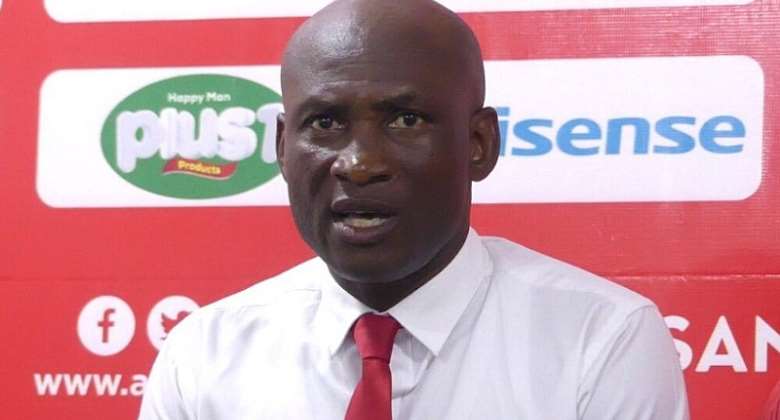 Premier League powerhouse, Accra Hearts of Oak are in talks with Prosper Narteh Ogum for the vacant coaching job at the club.

The FA Cup champions are currently without a head coach following the mutual termination of Samuel Boadu’s contract on Tuesday.

Hearts of Oak opened their season with a defeat against Aduana Stars at the Nana Agyemang Badu Park in Dormaa.

Returning to the Accra Sports Stadium in their second game of the season, Hearts of Oak were held to a 1-1 draw by their city-rivals, Great Olympics.

Boadu, however, led the side to pick a point against Asante Kotoko in the matchday 3 games at the Baba Yara Stadium last weekend.

The results leave Hearts of Oak at the 13th position on the league log with just two points.

However, following Boadu’s dismissal, the board and management are in talks to name Narteh Ogum as the new head coach for the side, according to a report filed by Kumasi-based Pure FM.

According to the reports, Narteh Ogum will be assisted by Karela United coach, Bismark Kobby Mensah.

Prosper Narteh Ogum is famously remembered for leading Kotoko to annex the 2021/22 Ghana Premier League in his first season at the club.

Both Prosper Narteh Ogum and Bismark Kobby Mensah are assistant coaches to Annor Walker, who is the head coach of the Black Galaxies.

Narteh Ogum together with Walker and Mensah masterminded Ghana’s qualification for the 2022 CHAN tournament.

Meanwhile, Dutch trainer, Erik Van Deer Meer, who has been in the country since last week will be named as the new technical director.

Prosper Narteh Ogum is currently clubless after parting ways with Asante Kotoko at the end of the 2021/22 Ghana Premier League despite signing a two-year deal.

Hearts of Oak will engage Bibiani Gold Stars in the matchday 4 games of the 2022/23 Ghana Premier League at the Accra Sports Stadium.