GBA President Neequaye reveals how he was lured into boxing 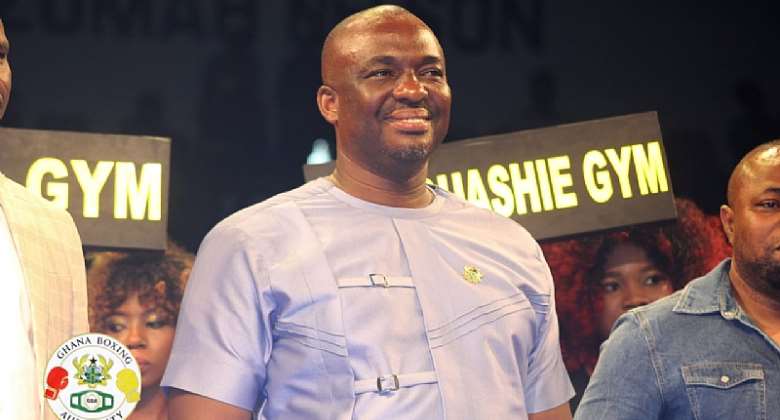 President of the Ghana Boxing Authority (GBA) Mr. Abraham Kotei Neequaye has revealed how he got into boxing, which has become his passion.

The politician who stood as a Parliamentary Candidate in the Okaikoi South Constituency for the National Democratic Congress (NDC) said as a businessman and adventurous, he wanted to try many things so when the late former world-rated and Africa Cruiserweight Champion / Coach Napoleon Ayaa Tagoe invited him to support and sponsor some local amateur bouts at Jamestown, he did it with love and donated electronic gadgets to boxers.

He got interested and went on to beat the late Gideon Quartey for the Greater Accra Amateur Boxing President position.

"So you know, I have been at the Amateur level and believe the Professional Body must support the Ghana Boxing Federation, it is all the reason we want boxers who fight outside to pay a levy so that the GBA to be financially sound to develop the sports at different places like we recently did at Akropong" he expressed.

The GBA President gave much respect to the late Coach Tagoe who founded the Will Power Boxing Gym as his inspiration for the game. He was linked to Emmanuel Game Boy Tagoe who became the international boxing council (IBC) Lightweight champion.

President Neequaye has also managed Braimah Kamoko aka Bukom Banku and others.

Currently, the focus is on his son, Cann Neequaye, a product of Accra Academy who is a juvenile rising very fast to join the amateur ranks, with a vision of representing Ghana at the Olympic Games or World Championships. The ultimate is to add to Ghana's Professional Boxing World Champions.

Mr. Abraham Neequaye is optimistic his boy can make history for himself and the family shortly. He does not regret venturing into boxing as it had made him popular, and have the opportunity to serve to make boxing better, attractive, and lucrative.

Friends of Boxing and Boxing Ghana wish him Good Luck and Success during his term as President of the Ghana Boxing Authority (GBA). He took over from Lawyer Peter Zwennes.