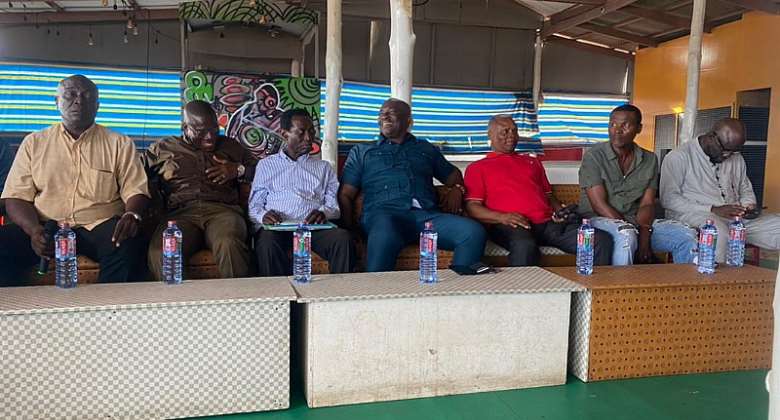 The first ever stakeholders meeting ahead of the first Annual General Meeting of the Ghana Boxing Authority GBA which started on a positive solid note at The Gym Boxing Club on Tuesday ended abruptly with the Promoters and Managers representatives not agreeing on some amendments in the Constitution.

President of the GBA, Mr. Abraham Neequaye called for the meeting after the Promoters and Managers have shown some concerns regarding the date for notice for the AGM which had to take 8 weeks for consultation and the signing of the draft Constitution.

He accepted the advice by stakeholders to work in consonant with the procedure stipulated in the Constitution, but observed that some aspects of the laws guiding of Professional Boxing in Ghana must be amended to correspond with modern trends.

He explained the Boxing League was started before he came to power, and he has changed the style for more boxers to benefit.

The Promoters / Managers representative, Alhaji Moshud Zaid who is a former board member of the GBA in the previous administration complained about the GBA supporting Imax Media Promotions, which was explained by the President that they are ready to work with all Promotions, but this was not to the satisfaction of all.

The Boxers' representative, George Ashie reminded the President of his campaign promise to organize the Black Fighters Tournament and suggested the creation of a fund to support them.

Nii Manponse, dad of Adote Otintor, Sempe Manste who was an observer called for the abolishment of the Professional Boxing League, but his suggestion was not accepted as many presents supported the crowd-pulling event and called for the involvement of experienced boxers in the bill.

Mr. Solomon Otoo, a Match Maker / Promoter suggested that a token should be charged at the gates to attract other established boxers and Promotions.

Nii Adama, a coach who guided Joseph Agbeko to win the World title and CEO of The Gym advised the stakeholders to unite and seek their rights. He said boxing can make change the living conditions of people if it is done right and fair. He thought that the League Competition which has a car at stake for the winner has been good for the gyms and boxers.

Some Managers who did not understand the Imax Media Promotions deal with the GBA could not agree with some explanation given by the Communications Director, Mr. Mohammed Amin Lamptey which turned to near chaos, so Coach Ofori Asare who is Ag President of the United Coaches Association called for a rescheduling of the meeting, which was agreed by Mr. Neequaye.

Young Match Maker, Yussif Mubarak said the meeting was good, but urged boxing officials to be patient and unite for a better future.

Present at the meeting were Executive Board members of the GBA, representatives of Match Makers, Referees, Coaches, Managers, Promoters, Ring Officials, and the media.