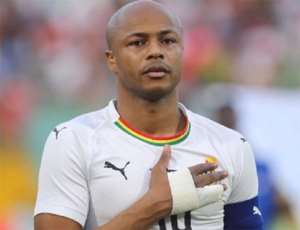 The captain of the senior national team, the Black Stars of Ghana, Andre Dede Ayew, has spoken about player selections in the team.

The skipper asserted that the newly called-up players are very talented and skilful, whereas the senior players who qualified the team for the World Cup are also formidable.

In an interview with Aljazeera, the forward intimated that the current squad needs to fight harder to justify their positions in the team by giving enough reasons to the coach.

“The newcomers are talented, but we already have a strong team that qualified for the World Cup, so every position is competitive.

“Apart from senior players who may have an advantage, I believe no one is guaranteed a place in the squad just yet,” he said.

He stressed that “everyone must prove their quality on the field and everyone has a chance, giving the coach more options and solutions, and formations, and I believe it is beneficial to have new players with the right mentality."

According to Dede, “the door is open for any Ghanaian who wants to play for and help the country, but you must come with the same determination you put into your club, the same desire, and you cannot expect everything in your European club to be the same in the national team because there is a time for the team to adapt.”

The team after losing their friendly match against Brazil with a 3-0 scoreline, are preparing to battle Nicaragua in another game on Tuesday, September 27.