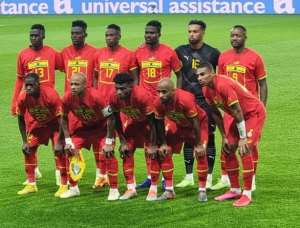 The Spain-based forward was a second-half substitute for the Black Stars last Friday when Ghana lost 3-0 to Brazil in Le Havre, France.

Having put up a good performance, Inaki Williams has today merited a place in the first eleven of the Ghana team to face Nicaragua in Lorca, Spain.

He starts the game alongside Osman Bukari and Abdul Fatawu Issahaku in the attack of the Black Stars.

Among the other changes made from last Friday’s game against Brazil, the experienced Richard Ofori has come in to replace Joseph Wollacott in post.

Southampton defender Mohammed Salisu has replaced the injured Alexander Djiku with Mohammed Kudus keeping his place in the midfield of the team.

Below is the Ghana starting eleven for the Nicaragua game:

We haven’t rejected Justices Gaewu and Koomson – Appointment...
28 minutes ago

Stop the wrongful, multiple sale of lands — Akufo-Addo to ch...
28 minutes ago