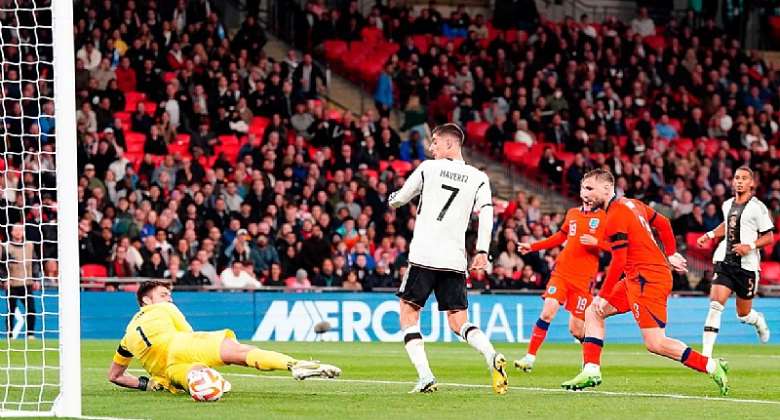 England roared back from 2-0 down to lead Germany only to concede late on as the two sides played out a thrilling 3-3 draw in a remarkable Nations League game at Wembley.

After a first half which saw England create the better chances, Germany were awarded a penalty six minutes into the second period after Harry Maguire fouled Jamal Musiala in the box. Match official Danny Makkelie pointed to the spot after viewing the incident on the pitchside monitor.

Ilkay Gundogan made no mistake from the spot, as he passed the ball coolly into the corner of the net to give Germany the lead.

Die Mannschaft then doubled their advantage in the 67th minute, as Kai Havertz bent a beautiful curling strike into the top corner from outside the area past Nick Pope, which left England staring down at yet another possible defeat.

However, the introduction of Mason Mount and Bukayo Saka sparked the Three Lions into life. Just five minutes after Havertz's strike, Luke Shaw saw his scuffed shot at the back post crawl into the net past Marc-Andre ter Stegen as England had their lifeline.

Then, three minutes later, Mason Mount put England level, with a brilliant strike into the corner of the net from inside the penalty area.

Late drama then ensued, as England were awarded a spot-kick of their own with nine minutes of regulation time remaining after Nico Schlotterbeck caught Jude Bellingham on the ankle inside the penalty area.

Harry Kane stepped up with poise to bury the resulting penalty into the top-left corner of the net as the Wembley crowd went wild in celebration.

But, the joy was short lived. England were not able hold out as Nick Pope spilled Serge Gnabry's shot from distance right into the path of Havertz, who had an easy tap-in to score his second of the night as Germany dramatically found their equaliser with three minutes of time remaining.

England's relegation from Nations League A3 had been confirmed before the result. Germany finish second from bottom with Italy topping the group following their 2-0 win over Hungary.