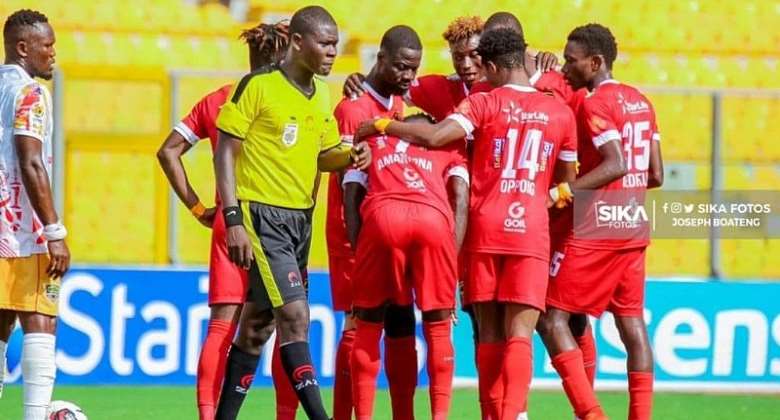 Current league Champions Asante Kotoko drew 1:1 with Accra Hearts of Oak in their first game of the 2022/23 Ghana Premier League Season at the Baba Yara Sports Stadium on Sunday.

One of the incidents that nearly marred the beauty of the match was how referee Selorm Yao refused to award Kotoko some penalties after some of their players were brought down in the box on several occasions.

In all the purported penalty situations, referee Selorm allowed play to continue to the chagrin of Kotoko supporters.

Referee Selorm's inability to award the penalties has created elephantine controversy within the footballing fraternity.

Some supporters of Kotoko have even gone to the extreme of calling on the Ghana Football Association to ban referee Yao for life.

Reacting to referee Yao's performance, a senior referee who spoke in anonymity with Hot 93.9FM's sports journalist Ebenezer Amuzu has revealed that only one out of three was a clear penalty.

According to Amuzu, the senior referee indicated that the only incident which should've been awarded was when Hearts of Oak's defender, Caleb Amankwah brought down Kotoko danger man Augustine Frimpong in the 18-yard box.

Explaining why referee Yao refused to award the penalty to Kotoko, Amuzu revealed that the senior referee quickly alleged that," while watching the match at the stadium, from where he was seated, he saw that referee Yao was about to whistle but the assistant referee lines one for the game Patrick Papala signalled him not to whistle hence the reason he couldn't award the penalty."

Listen to Amuzu in the video below!