Match Report: Hearts of Oak fight to draw 1-1 against Asante Kotoko in Kumasi 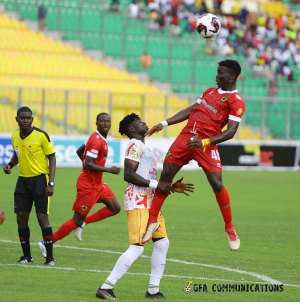 A late strike from defender Caleb Amankwah saved Hearts of Oak from a defeat to Asante Kotoko on Sunday in the Ghana Premier League.

The Phobians travelled to Kumasi this weekend for the first Super Clash of the 2022/23 Ghanaian top-flight league season.

Prior to the clash today, the capital-based club had failed to win a game in the first two matches of the new campaign.

Despite fielding a strong team for the game against Asante Kotoko, Coach Samuel Boadu’s team was dominated by the opponent today.

Hearts of Oak luckily did not concede in the first half after the attackers of the home team wasted a number of chances.

Early in the second half, Asante Kotoko finally got the breakthrough when Yussif Mubarik scored with a fine strike to shoot the hosts into a deserved lead.

Although the team would continue to play well, Hearts of Oak put up a resilient display in the final 10 minutes of the game.

The away team scored through Caleb Amankwah in the 88th minute to secure a 1-1 draw from the away game.

We haven’t rejected Justices Gaewu and Koomson – Appointment...
57 minutes ago

Stop the wrongful, multiple sale of lands — Akufo-Addo to ch...
57 minutes ago