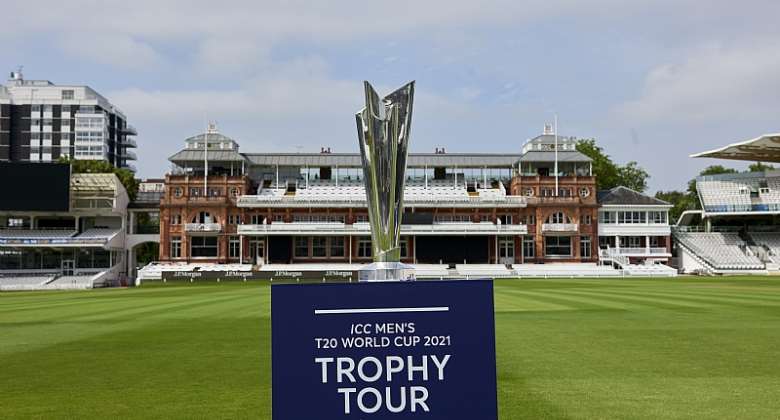 Ghana’s capital Accra will receive the International Cricket Council (ICC) T20 World Cup on Thursday, September 22, 2022, as one of the countries selected for this historic event.

The trophy would have a two-night stay in the country and is expected to depart on Saturday, September 24, 2022.

The ICC T20 World Cup Trophy would visit the Seat of Government (Jubilee House), Parliament of Ghana, Ga Mantse’s Palace, the Black Star Square, and the Residence of the Australian High Commissioner in Ghana.

It would also make a stop at the Achimota School and the Presbyterian Boys Senior High School where the students and the public would have the opportunity to take some photos with the iconic trophy.

The Trophy Tour has already visited over 30 locations in 12 countries across four continents, more than ever before.

The Men’s T20 World Cup trophy made stops in Fiji, Finland, Germany, Indonesia, Japan, Namibia, Nepal, Singapore, and Vanuatu for the first time, taking the sport to more fans in different countries to get a glimpse of T20 cricket’s ultimate prize.

The Trophy Tour that is designed for anyone, anywhere at any time would enable fans to get involved from home with a 3D augmented reality filter, housed on the official T20 World Cup Facebook and Instagram channels.

Fans are encouraged to get creative and show the world where you play cricket using the trophy filter. The best of the fan-generated images will be celebrated weekly and a lucky few will be rewarded with ICC Men’s T20 World Cup themed prizes.

ICC Chief Executive Geoff Allardice said: “With just 100 days to go until the start of the ICC Men’s T20 World Cup there is a real sense of excitement ahead of the 16 teams coming together in Australia to compete for the ultimate prize in T20 cricket.

“Celebrating the start of the ICC Men’s T20 World Cup Trophy Tour, driven by Nissan, is another important milestone in taking the Trophy to ten countries for the first time ever, once again showing our commitment to using the T20 format as vehicle to grow the game and to engage new fans across the world.”

ICC Men’s T20 World Cup Trophy Tour, driven by Nissan, ambassador Shane Watson said: “As a player, there’s few things that can top playing in a home World Cup and I can’t wait to see the world’s best T20 players on the fast bouncy pitches in Australia. It’s going to be an incredible spectacle.

“Leading up to the event, I’m also looking forward to taking the T20 World Cup trophy around our beautiful country to give fans the opportunity to be part of this massive cricket celebration.”

GCA President, Mr Emmanuel Asare said “Ghana is pleased to have an opportunity to be selected as one of the countries to receive the trophy. This is a big boost for the Ghana Cricket especially as Ghana prepares to host the 2023 Africa Games.

“We invite all Ghanaians and cricket lovers to join us to make this historic event a memorable one as we welcome the prestigious ICC T20 World Cup Trophy.”

About the T20 World Cup:

Australia was originally scheduled to host the event in 2020, before it was postponed due to COVID-19 and re-scheduled for 16 October – 13 November 2022. Matches will be played in Adelaide (Adelaide Oval), Brisbane (The Gabba), Geelong (Kardinia Park), Hobart (Bellerive Oval), Melbourne (MCG), Perth (Perth Stadium) and Sydney (SCG).

It’s the first time Australia will host the ICC Men’s T20 World Cup after a record-breaking women's event, which was held in February - March 2020. The final at the Melbourne Cricket Ground, was won by Australia over India in front of 86,174 spectators, a record crowd for women's sport in Australia and the second-highest crowd ever recorded for a women's sporting event globally.

Australia will enter the eighth edition of the men’s event as defending champions after winning their maiden ICC Men’s T20 World Cup title in 2021, defeating New Zealand in in the final played at Dubai International Stadium.

The ICC Men’s T20 World Cup 2022 will feature 16 international teams playing 45 matches with the final to played on Sunday November 13 at the Melbourne Cricket Ground.