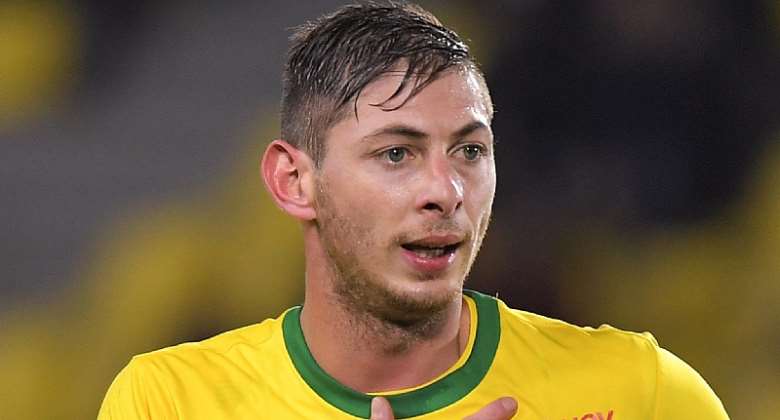 The pilot of Emiliano Sala's plane told friends the aircraft was "dodgy" before the flight that killed the Argentine footballer, it can be revealed.

David Ibbotson is heard in exclusive audio obtained by the BBC saying "I'll be wearing my life jacket" on the journey from France to Wales.

He told a friend he heard a "bang" on a previous flight. The plane crashed into the English Channel in 2019.

A new podcast also reveals footage of the last time the pair were seen alive.

Sala had just become then Premier League side Cardiff City's £15m record signing from French club Nantes when the plane crashed into the English Channel.

He was flown by Mr Ibbotson - a part-time pilot who didn't have a licence to carry paying passengers - back to western France to say his goodbyes and collect some belongings.

He flew to Nantes on Saturday, 19 January, and planned to return on the Monday - the day of the crash.

Audio of a telephone call to a fellow pilot has been exclusively obtained by the BBC, revealing for the first time the technical difficulties Mr Ibbotson had on the journey to France.

In it, he says he heard "a bang" during the flight and complained that he could feel a "very low mist" inside the 35-year-old Piper Malibu plane.

"I'm flying along and then 'boom'. I thought, 'what's wrong?' So I put everything forward and checked my parameters, everything was good and it was still flying, but it got your attention."

He added: "That Malibu, occasionally you've got like a mist every so often. You can feel it, very, very low throughout the airframe."

Mr Ibbotson, 59, said he also realised the Piper Malibu's left brake pedal wasn't working after landing at Nantes Atlantique Airport. "This aircraft has got to go back in the hangar," he told his friend.

The conversation was accidentally recorded and has since been obtained by the BBC's Transfer: The Emiliano Sala Story podcast.

Image caption: Going through security at Nantes Airport is the only time Emiliano Sala is seen with pilot David Ibbotson

Ahead of the flight back to Cardiff, Mr Ibbotson added: "Normally I'd have my life jacket between my seats but tomorrow I'll be wearing my life jacket."

The only two people on the plane were Emiliano Sala and Mr Ibbotson, from Crowle, in North Lincolnshire, whose body has never been found.

The footballer had also expressed his fears about the aircraft in a voice note sent to his closest friends as the plane was taxiing on the runway at Nantes Atlantique Airport.

The player told them, "man, I'm scared" and that the plane he was on "looks like it's falling apart". "I don't know if someone will look for me because they won't find me," Mr Sala told his friends about a potential crash.

Image caption: Radar contact was lost when the aircraft was 22 nautical miles (40 km) north-north-west of Guernsey

Cardiff City FC had offered their new signing a commercial flight, via Paris, but he wanted more time to say goodbye to friends and team-mates in Nantes before returning to Wales for his first training session with his new club.

So Willie McKay, the man who helped broker the transfer, chartered a private flight - directly between Nantes and Cardiff - through another pilot, David Henderson.

Because Henderson couldn't undertake the request, he called in Mr Ibbotson.

The Argentine did not know Mr Ibbotson wasn't qualified to fly him on that fateful night. The gas fitter was only an amateur pilot and did not have a licence to carry paying passengers or to legally fly in the dark.

About an hour after take-off from runway three, in Nantes, Piper Malibu N264DB lost radar contact over the English Channel, and air and sea rescues were launched.

The plane had been flying at 5,000ft but the pilot lost control while descending to avoid clouds and ditched into the English Channel, just north of the Channel Islands, at an estimated 270mph (434kph).

Air accident investigators found the footballer would have been "deeply unconscious" from carbon monoxide poisoning and that the pilot would have probably been affected too.

The player's body was recovered from the wreckage when it was discovered 68m (223ft) below the English Channel, two weeks after the crash. Plane N264DB was left on the seabed.

Henderson, who arranged the flight, was sentenced to 18 months in prison for recklessly endangering the safety of an aircraft in the way he organised the trip and using a plane commercially without permission.