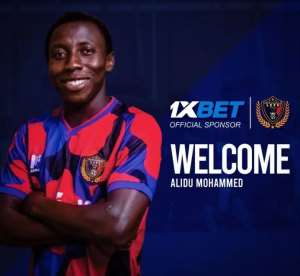 The 17-year-old midfielder has signed a three-year contract last week.

Alidu was the second top scorer for Madina Manchester United in the just-ended division 2 league by scoring eight goals.

Speaking to the media after the signing of the contract, Alidu said he is very optimistic that with support from his teammates, his contribution will have a positive impact on his new club.

The player who turns 18 in October is excited to begin a new chapter at Legon Cities.

“Every aspect of the club suits my goals for playing football. I am aware of the team’s and the coaching staff’s abilities. I am committed to contribute to creating something unique work for the team and the supporters.

"I am looking forward to stepping out onto the pitch and playing according to my gaffer’s instructions and win trophies," he added.