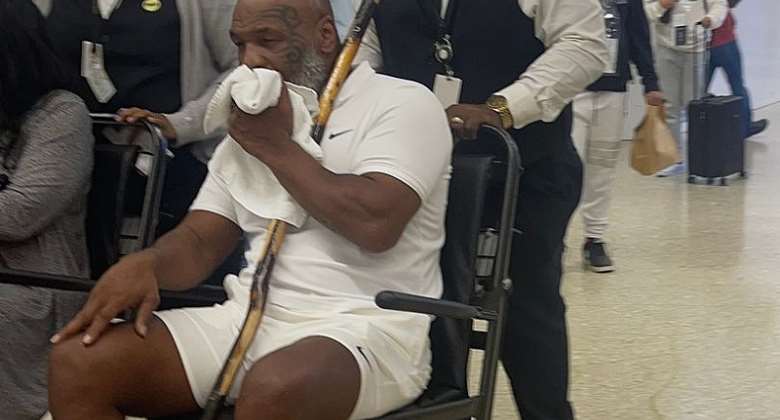 Mike Tyson was pictured in a wheelchair at Miami International Airport

Mike Tyson has opened up over a rare condition that he is suffering from called Sciatica after photos emerged of him in a wheelchair.

Last month, fans were left concerned over the former heavyweight champion's health after pictures emerged of him at an airport wheelchair-bound. There were also snaps of Tyson needing the help of a walking stick,

He has since spoken out on speculation surrounding his health, speaking to Newsmax. 'I have sciatica every now and then, it flares up," he said.

"When it flares up, I can’t even talk! Thank God it’s the only health problem I have. I’m splendid now. Everybody in my house is truly blessed and we’re all very grateful for whatever we have."

The condition has serious impacts on the nervous system in the body, particularly the nerve endings affecting the back. After a lifetime spent in the ring, it appears that the it is starting to take a toll on his health.

Iron Mike called time on his heavyweight career in 2005 after back problems started to impact his performance in the ring. And the issues have appeared to rear its head once again, this time leaving him in a wheelchair and unable to speak.

It has led to real concerns from his fans that his health is under serious threat. It was not long ago when speaking on his Hotboxin' podcast that he does not reckon he has long left to live.

"We’re all gonna die one day of course. Then, when I look in the mirror, I see those little spots on my face," he said. "I say, 'Wow. That means my expiration date is coming close, really soon.'"

While Tyson might have retired from boxing 17 years ago, he returned to the ring in 2020 when he took on Roy Jones Jr in an exhibition fight. The clash ended in a draw and ultimately a disappointment, though.

During his professional career, Iron Mike was renowned for his knockout punches. His speed and ferocity shook the heavyweight division, obliterating the likes of Larry Holmes, Frank Bruno and Trevor Berbick.

But his life out of the ring also drew unwarranted attention going to prison in 1992 for rape, as well as becoming addicted to drugs such as cocaine. 30 years on, Tyson has since changed his life, converting to Islam and growing his own marijuana.