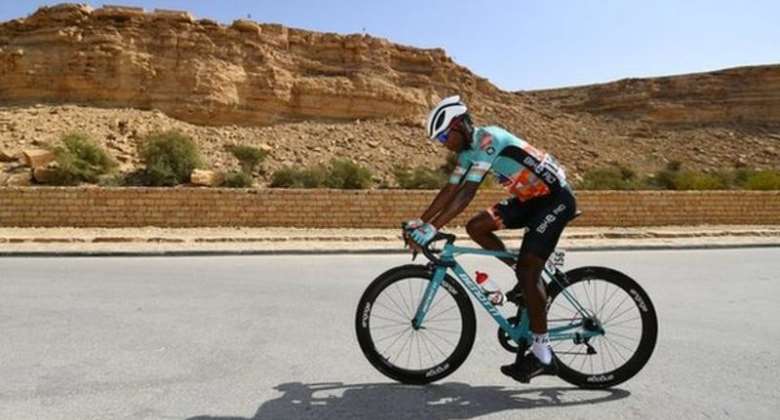 Kenyan cyclist Suleiman Kangangi has died following a high-speed crash in a race in the United States on Saturday.

The 33-year-old, who raced for the East African based Team Amani, was taking part in the Overland gravel race in Vermont - a 59-mile dirt-road contest including almost 7,000ft of climbing.

"Sule is our captain, friend, brother. He is also a father, husband and son," the team said in a statement.

"Gaping holes are left when giants fall. Sule was a giant.

"Instead of leading us at the front of the pack, he will now lead us as our guiding pole star as we press forward in the realisation of his dream."

Kangangi finished third in the Tour of Rwanda in 2017 while racing for the German UCI Continental team, Bike Aid, before switching to gravel racing. His latest team, Amani, sets out to "support the development of young East African cyclists" primarily from Rwanda, Uganda and Kenya,

"My heartfelt condolences to his family, and the entire cycling community, that has lost a talented cyclist, a mentor and a friend," Rachel Ruto, the wife of president-elect William Ruto of Kenya, posted on Twitter.

"We will all miss him as an individual. Kenya has lost a champion. Rest in peace Sule."

About 900 cyclists were competing in the event on Saturday which was won by Amani's John Kariuki while team-mate Jordan Schleck finished third.

"Vermont Overland is completely heartbroken," its organiser, Ansel Dickey, said in a statement. "We extend our deepest sympathies to his family, his friends, Team Amani, and the people of Kenya."