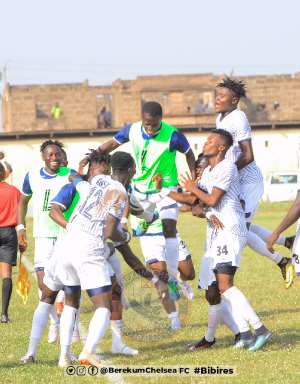 On Wednesday, the pre-season tournament organised by the Ghana League Clubs Association commenced in Accra.

The first match of the tournament between Great Olympics and Bechem United ended in a goalless draw at the end of regulation time.

After excelling in the penalty shootout with a 5-4 victory, Bechem United bagged the maximum three points.

Today, A second match of the tournament between Berekum Chelsea and Medeama SC has been played at the Accra Sports Stadium.

At the end of the thrilling contest that ensued between the two Premier League clubs, Berekum Chelsea carried the day thanks to a 2-0 win over the Group B opponent.

Courtesy of the result, the Blues are advancing to the knockout phase of the 2022 GHACLA Top 6 tournament.

Berekum Chelsea will next play Hearts of Oak on August 24.