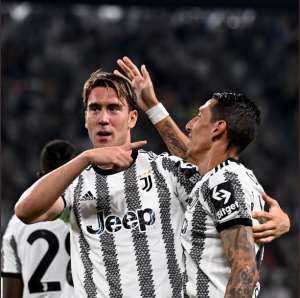 An Angel Di Maria debut goal and a Dusan Vlahovic brace helped Juventus beat Sassuolo 3-0 in their Serie A opener.

Di Maria was found by Alex Sandro deep into the visitors’ penalty box and watched his volley drive into the ground before bouncing over Andrea Consigli’s head to break the deadlock for the hosts.

Vlahovic soon got in on the action, and did excellently to force a foul out of Gian Marco Ferrari to win a penalty on the stroke of halftime. He made no mistake from the spot, and fired his spot kick straight down the middle to double Juventus’ lead.

Juventus stretched their advantage further when Di Maria capitalised on a catastrophic Sassuolo error on the edge of the box.

The Argentine pounced on the loose ball and found Vlahovic, who slotted the ball beyond Consigli for his second goal of the game.

It wasn’t a walk in the park for Juventus, who were troubled a number of times in the opening 20 minutes of the game, but goalkeeper Mattia Perin impressed in the absence of Wojciech Szczesny to keep out a string of Sassuolo efforts early on.

Juventus took their foot off the gas towards the end of the second half, as they went on to wrap up all three points in their opening game.