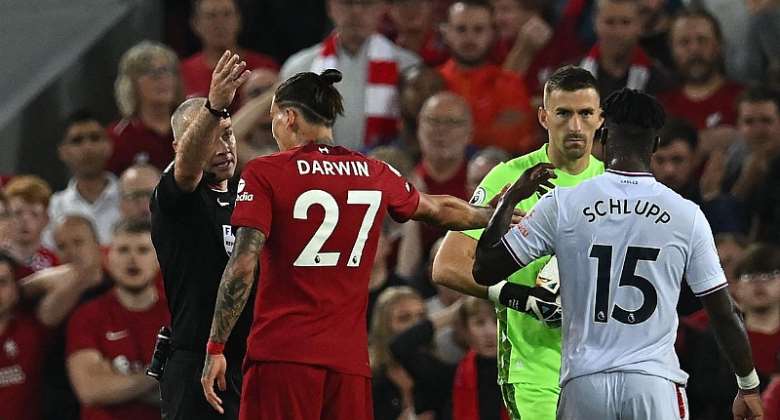 Another terrific match in “this league” ended with Crystal Palace holding Liverpool to a 1-1 draw at Anfield.

Wilfried Zaha burgled Palace a superb lead and then Darwin Nunez was sent off for a hilarious and silly headbutt, before Luis Diaz conjured a sensational equaliser; Liverpool have just one point from two games, and even at this early stage of the season, will be worried about their title prospects.

The first half went almost exactly as Patrick Vieira would have wanted and expected.

Liverpool, presumably irritated by their dropped points at Fulham, started well and missed various chances, none glaring but various presentable.

Then, on 32 minutes, a perfectly executed break saw Eberechi Eze feed Zaha, who streaked away from Nat Phillips and finished beautifully.

Then, on 57 minutes, Joachim Anderson shoved Nunez… who turned and applied brow to face by way of revenge!

The referee had no option but to brandish a red card, but the flow of the game didn’t change, and on 61 minutes, Diaz scored a jazzer, jinking across the face of the box before punishing a glorious sidefooter into the far side-netting.

Liverpool gave everything in search of a winner, but it was actually Palace who came closer to stealing the points, Zaha hitting the post when on the slide