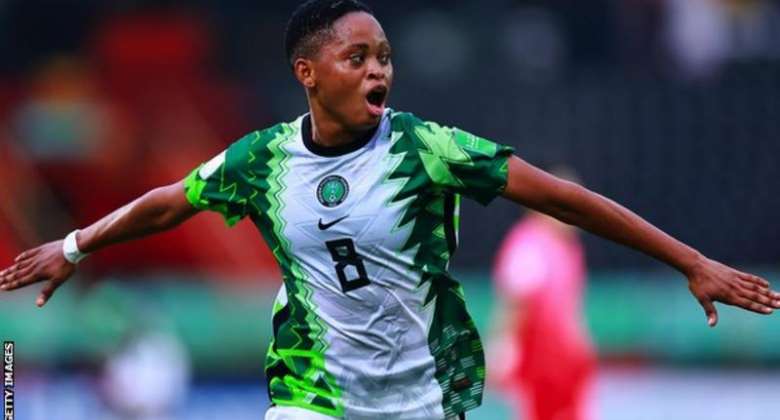 Esther Onyenezide gave Nigeria U20 Women a second successive 1-0 win, after their opening victory over France

Nigeria booked their place in the quarter-finals of the Under-20 Women's World Cup in Costa Rica with a 1-0 win over South Korea, but Ghana were eliminated after a second defeat.

The Falconets' Group C game was delayed by an hour after a storm hit the Alejandro Morera Soto Stadium in Alajuela and the Nigerians weathered several first-half attacks from the Koreans to stay in the game.

But Onyenezide scored with a thunderous strike from outside the box in the 83rd minute and fabulous goalkeeping from Omini Oyono helped Nigeria seal a second 1-0 win and a spot in the quarter-finals.

"We are a giant in Africa and fear no other team," player of the match Onyenezide said.

"We've trained an unbelievable amount and if you look back at qualifying, then we've every right to be confident out here whenever we play. We want to show the world that we're not just big in African terms but that we can beat any other team."

The Falconets, who lost in the tournament's final in 2010 and 2014 to Germany, opened with a 1-0 win over France and face already-eliminated Canada in their final group game on Thursday.

Ghana - the other African team involved in the tournament - were handed another Group D defeat following a 2-0 loss to Japan.

The Young Nadeshiko bombarded their opponents for most of the match and should have won by a wider margin in a game that was delayed by torrential rain.

The Black Princesses, who looked fragile at the back, cracked in the 61st minute when they conceded a penalty for handball that was converted by Maika Hamano.

Ghana, who had never gone past the group stage of the tournament in five previous appearances, will end their campaign against the Netherlands on Thursday.