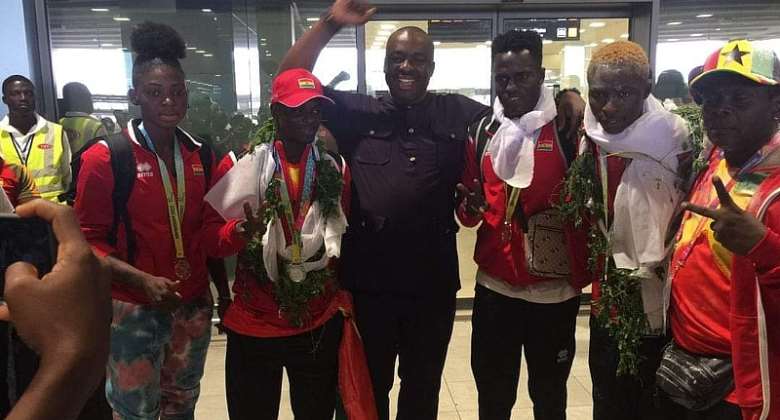 Team Ghana arrived from Birmingham, UK on Wednesday morning. They were welcomed by dignitaries including the President of the Ghana Boxing Authority, Mr. Abraham Neequaye, former President of the Ghana Boxing Federation, Mr. George Lamptey, and Mr. Alex Ntiamoah Boakye, CEO of Box Office Boxing Promotions, and Majeed Bawa of the Dep. Director General of the National Sports Authority [NSA].

Also at the airport to welcome the sportsmen and women were coaches and boxing fans of Joseph Commey aka Jaguar, Abraham Mensah who won silver, and Wahid Omar who got bronze in boxing.

Deborah Acquah who laced Ghana's medallist when she won the bronze in Long Jump was also welcomed by her fans, friends, and family.

Ghana's other medal winner was Joseph Paul Amoah who placed third in 200 meters and got a bronze medal.

Coach Ofori Asare of the Black Bombers thanked all who supported them in difficult times and hoped that things would change for the better in terms of the welfare of national amateur boxers.

President of the Ghana Boxing Federation, Mr. Ben Quartey also thanked the Ministry of Youth and Sports and the National Sports Authority as well as the Ghana Olympic Committee, and all who in diverse ways contributed to their success.

He called for more investment in boxing because it is the nation’s number one sport in terms of achievements.

“We are not going to rest as we have more work to do,” he added