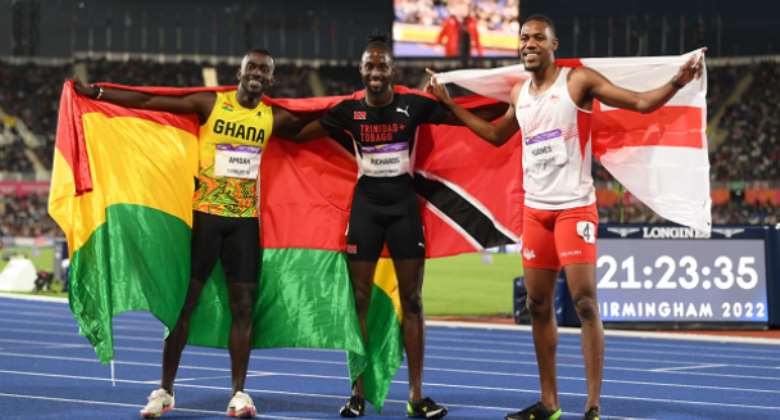 Boxing once again proved to be Ghana’s leading light at the 2022 Commonwealth Games, as three members of the Black Bombers provided medals in a dramatic weekend for Ghana’s contingent.

On a weekend where Ghana’s men’s 4x100 metres quartet were denied a chance to compete for a medal after they were disqualified due to technical error by the team officials, one of the country’s hopes for a gold medal, Joseph Commey suddenly developed bodily pains and was declared medically unfit to contest in the final of the featherweight division yesterday, leaving him to settle for a silver medal.

Ironically, the last Ghanaian athlete to arrive in Birmingham, Deborah Acquah, saved her best for last as she was the country’s fifth and final medal in Birmingham on Sunday night.

The 26-year-old athlete arrived in Birmingham just 48 hours to the start of the women’s long jump following a delay in receiving her UK visa. However, once the competition started, she got into her groove and won a bronze medal with a leap of 6.94m in the final. bShe finished behind Australia’s Brooke Buschkuehl (silver) and Nigeria’s Ese Brume who recorded a leap of 6.99m to win gold.

A student of Texas A&M University, Acquah’s jump of 6.94 metres was a new national record, obliterating her previous mark of 6.89 metres set on April 4 at the Texas Dual Meet, which made her the seventh-best collegian of all time.

Another debutant Abraham Mensah settled for a silver medal after losing the final of the bantamweight contest to Dylan James Eagleson yesterday.

Last Saturday, Abdul Wahib Omar lost his semi-final contest to Louis Richarno Colin of Mauritius in the semi-finals to win a bronze.

However, there was consolation for the men’s track and field stars as Joseph Paul Amoah finished third in the men’s 200 metres final to win a bronze medal last Saturday.

Commey’s failure to make it to the final was a big blow to Ghana, coming after officials botched a chance to win a medal in the men’s 4x100 metres final

The 18-year-old boxer has been a revelation at the Games after dispatching three opponents en route to the final. His Northern Ireland opponent, Jude Gallagher, earned a walkover and the easiest gold medal win without throwing a punch in the final.

Yesterday, 19-year-old Mensah lost via a unanimous decision to Eagleson to finish the tournament with a silver medal.

Having had byes in the Round of 32 and 16 stages of the competition, Mensah fought his way to the final with impressive quarterfinal and semi-final victories.

On the other hand, Omar failed to live up to expectation being the most experienced member of the Black Bombers team having already appeared at the 2014 and 2018 editions of the games respectively.

The 28-year-old was defeated by Mauritius’ Louis Richarno Colin in the semi-finals to deny him a chance at challenging for gold.

With Team Ghana competing in 13 sporting disciplines with over 100 athletes, athletics joined boxing as the only sport to win a medal for the country.

But for the technical violation by the Ghana Athletics Association (GAA), Team Ghana could have secured another medal in the 4x100m relay.

A quartet of Benjamin Azamati, Sean Safo-Antwi, Abdul-Rasheed Saminu and Barnabas Agerh were disqualified despite finishing third with a national record time of 39.05s in Heat 1 of the 4x100m relays.

Responding to the disappointment that led to Ghana being disqualified, the leadership of Team Ghana in Birmingham called for the GAA to provide them with an extensive report detailing what led to the unfortunate incident.

But the GAA in a statement apologised to the athletes and the entire nation for what they described as a technical oversight that led to Ghana’s disqualification.

In the men’s 100m race, Azamati came close to snatching a bronze medal but missed out on the finish line to place fourth in a time of 10.16 seconds, as Kenya’s Ferdinand Omayal stormed to a gold medal in a time of 10.02 seconds.

Meanwhile, the women’s 4x100m relay team managed to finish seventh in the final race in what ended their hopes of winning a medal at the Games.

In high jump, Abigail Kwarteng and Rose Yeboah of Ghana failed to win a medal in the women’s high jump competition despite the former clearing the height of 1.85m.

Having gone ahead to clear the bar at 1.91 metres, Kwarteng failed to pull off the height of 1.92 metres as she missed out on a place in the medal zone.

Yeboah, on the other hand, had a personal best as she cleared the height of 1.85metres but struggled with the bar at 1.89 metres.

Team Ghana struggled to make headway in disciplines such as swimming, table tennis, badminton, squash, weightlifting, hockey, beach volleyball, and , among others.