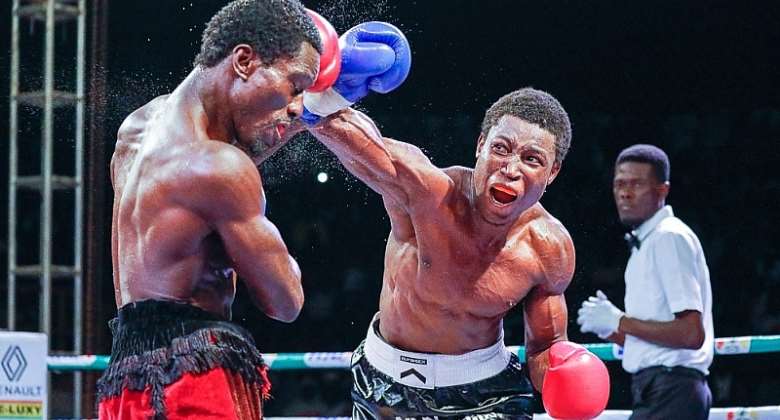 The former kickboxer, Isaac Commey representing the Sea View boxing gym lost his first professional boxing bout to Alidu Sulemana aka ‘Dynamite’ who hails from the Brong Ahafo region of Ghana on Fight Night 10 of the De-luxy Paint Professional Boxing League at the Bukom Boxing Arena on Saturday.

Now registering his 6th fight with a round 4 KO, Alidu was so powerful, experienced, as well as devastating on the night, giving Commey no chance to put his plans together.

They gave boxing fans an explosive night, Commey assured his fans of better exciting moments as he has learned much and hope to perform better.

In a Middleweight contest, Iddrisa Amadou with 17 fights experience of CQBF lost to marvelous Musah Lawson representing Sonia boxing gym in another thrilling bout. The judges scored 60-54, 60-54, and 60-54 in favor of Musah.

Musah, an employee of the Ghana Prisons Service and a former Black Bomber with seven professional wins exhibited classic boxing on the night fight.

Aminu Quarshie expertly dispatched James Lamptey back to the Palm Springs Gym as he displayed excellent boxing skill after 2:48sec in round 2. His wife at ringside was filled with tears of joy.

Michael Ansah aka One Bullet was crowned with a new championship title.

Ansah of Ghana, in the red and black trunks, shut down the Arena with an impressive victory over his Togolese opponent Komlagan Houkptin in the international LBO lightweight championship.

John Quaye ‘The Magic Man’ also won an international title at stake as he defeated Somabe Sylvestre of Togo.

He thanked the Ghana Boxing Authority (GBA) for the support, opportunity, and positive leadership.