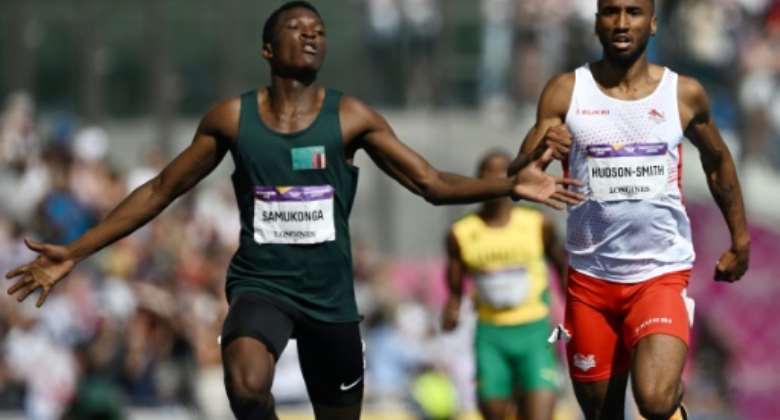 Zambia's Muzala Samukonga (L) comes home ahead of second-placed Matthew Hudson-Smith of England to take gold in the men's 400m final at the Commonwealth Games in Birmingham. By Ben Stansall (AFP)

Samukonga, 19, who timed 44.66sec, exited the stadium in a wheelchair after tripping over a low advertising hoarding as he ran to collect his national flag.

England's Matthew Hudson-Smith, who won bronze in the event at last month's world championships, was forced to settle for silver.

The 27-year-old had set his hopes on gold but was sanguine after admitting recently that he had attempted suicide last year.

"It's not the colour I wanted but you have to take the good with the bad," he said. "If you asked me a year ago would I be able to do this I would have said 'no'."

The English athlete, seeing Samukonga crying on the podium during the medals ceremony, put his hand on his shoulder.

Williams, 24, who won bronze at the recent world championships, set a new Games record of 49.90sec, with Ohuruogu taking silver.

'It's amazing (to be part of the Barbados team)," said Williams. "I am so proud of Jonathan (Jones who won bronze in the men's 400m).

India also celebrated a historic gold, which adds gloss to a highly successful athletics competition for them in Birmingham.

"The sporting culture in India is changing," said the triumphant Paul, who added that athletes were getting more support from sports authorities in the country.

The 25-year-old defending champion was trailing behind Jamaica's Olympic bronze medallist Megan Tapper but the Nigerian powered past her to ease home.

"To get the win and defend my title means everything to me," said Amusan, who added even her father had accepted she made the right decision in focusing on her athletics.

"I was more into doing track," she said. "He got really upset in the end. But he is an amazing man. He is proud of me."

Devynne Charlton of the Bahamas took silver and England's Cindy Sember won bronze while Tapper and her compatriot, 2015 world champion Danielle Williams, missed out on medals

The England 4x100m relay teams gave the home crowds something to cheer, winning the men's race and finishing second behind Nigeria in the women's event.

Scotland's Eilish McColgan will be seeking to add 5,000m gold to her 10,000 title in the final session on Sunday evening.

Her team-mate, Laura Muir, bids to win gold in her favourite 1,500m event after taking bronze in Saturday's 800m.