Abraham Mensah through to gold medal chase at Commonwealth Games 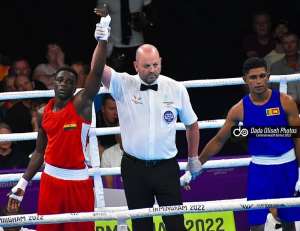 Abraham Mensah is through to the gold medal fight after defeating Owain Harris-Allan of Wales to make the bantamweight final at the 2022 Commonwealth Games in Birmingham, UK.

His next fight is against Northern Ireland's Dylan Eagleson in the men's bantamweight final tomorrow, Sunday, August 7, 2022.

Ghana last won gold at the Commonwealth Games in Malaysia in 1998 where Raymond Narh excelled.

Coach Asare said he has already been winning medals at the Commonwealth Games, so nothing is new or strange. He was however not happy with the preparation and motivation for the boxers.

He commended his coaching staff for the support and the management of the Ghana Boxing Federation.