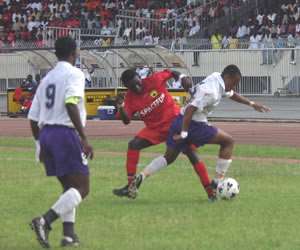 Tough duels await visiting clubs tomorrow at seven centres as home teams have enough reasons to snatch all the points at stake.

For Hearts, the desire is to consolidate their position on the 'hot top seat' of the GT Premier league. Contenders Kotoko, on the other hand, are in good position to reclaim the position they relinquinshed a few days ago to their rivals.

Kotoko play Ashgold for the second time in two weeks at the Baba Yara Stadium. The visitors are bent on avenging the 0-1 defeat they suffered in the first round at the Len Clay Stadium.

Indeed, that dream appears difficult to realise, although the Porcupine Warriors have not been impressive in recent days.

Hearts of Oak return to their Accra base after holding free-flowing soccer exponents Feyenoord, to a goaless drawn game to play Sekondi Hasaacas.

Tema Real Sportive will embark on a trip to Kpando to battle Hearts of Lions.

In other games, Okwawu United welcome Liberty Professionals, with Arsenals being the guests of Bofoakwa in Sunyani.

RTU will trek to Tema to play Power F.C., while Feyenoord stay at Swedru to battle Ebusua Dwarfs.

The match between Faisal and Hotspurs has been postponed on account of Faisal's Confederation Cup campaign.