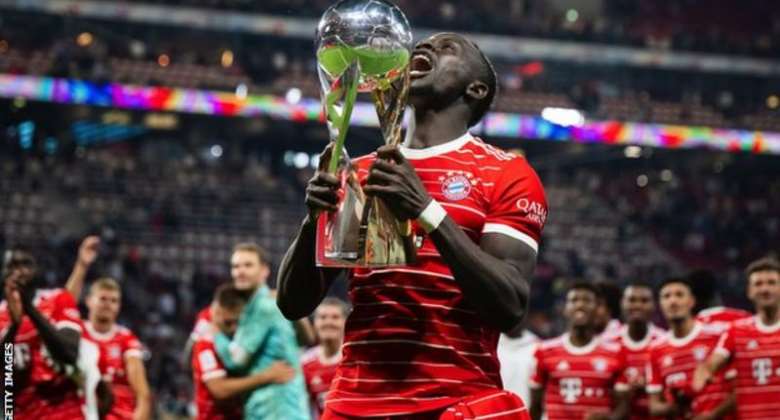 A Premier League, FA Cup, Champions League and Club World Cup winner with Liverpool, Sadio Mane is now embarking on a new chapter in his career at Bayern Munich.

The 30-year-old forward joined the German giants for a fee of £35m after six years at Anfield, where he scored 120 goals in 269 games.

Mane, who was key to Senegal's Africa Cup of Nations victory in February, netted on his competitive debut for Bayern as the Bavarian club won the German Super Cup last Saturday.

Former Nigeria international Efan Ekoku is backing Mane to adapt to the Bundesliga and be a hit for the six-time European champions.

"I think that as a top-class player and professional, he will succeed at Bayern for sure," Ekoku told BBC Sport Africa.

"He's made a good choice. If you're going to leave a big club like Liverpool and if you are still at the peak of your powers, then you've got to choose wisely.

"Mane has done and gone to a club as storied as Liverpool, over the last 40 to 50 years, in Bayern. The chances of him being successful in the Bundesliga with Bayern are just as great, if not more so."

After spells at Metz, Red Bull Salzburg and Southampton, Mane moved to Liverpool in 2016 and went on to score 90 Premier League goals for Reds, finishing his final season with 23 goals in all competitions.

Mane told BBC Sport Africa last month that his reason for quitting Liverpool was to seek a new challenge, and he is expected to make his Bundesliga debut against Eintracht Frankfurt on Friday evening.

Yet, despite his growth and remarkable success in England, former DR Congo captain Gabriel Zakuani expects Mane will have to adapt to a new system in Germany.

"We know Mane is a workhorse - and he's got the quality to go with it - but it will be difficult for him," Zakuani told BBC Sport Africa.

"I think it could be a different sort of challenge for him, because at Liverpool he had a system spot on, in that he had everyone doing the hard work with him.

"With Bayern Munich it's completely different - they play a different style, so he may struggle to adapt, but Mane is the sort of player that loves learning.

"We've seen the changes he's had since he was at Southampton, and how he's become a world star. Now he's going to Bayern as a big-name player, so I'd expect him to do well, eventually, but it may take him a little bit of time to bed in."

Ekoku, however, thinks adjusting to life in the Bavaria should prove no problem for Mane.

"If Mane can hit 18-20 goals in the league and 25-plus in all competitions over the last four or five years for Liverpool, there's no reason why he shouldn't be hitting those figures in the Bundesliga," the 55-year-old former Norwich City striker said.

"It'd be tough as it'll take him a while to adjust. I think he should acclimatise pretty well.

"Mane is a competitor, he's a real warrior. I've got no doubts about him."

The 2021-22 campaign was a successful one for Mane, who won the Nations Cup with Senegal before helping Liverpool win the League Cup and FA Cup and finish runners-up in the Premier League and Champions League.

He will replace Robert Lewandowski at Bayern, with the Poland international sealing a transfer to Spanish giants Barcelona.

But Zakuani believes the reigning African men's Player of the Year is a completely different player from the 33-year-old Pole, who scored 344 times in 374 games for the Allianz Arena outfit.

"I don't think it's comparable with Mane playing more from wide, but his goalscoring record was good lately for Liverpool.

"Going into the Bundesliga, they will probably expect him to chip in with the bulk of the goals because of the fee, because a lot of German clubs don't tend to pay that sort of money."

Ekoku, the first player to score more than three goals in a Premier League game and also the first African to score a hat-trick in the division, agrees.

"I don't think it's a straight swap. I don't think there are many players like Lewandowski in world football," he said.

"But I think (Bayern coach) Julian Nagelsmann is looking for a different type of Bayern attack anyway. We all saw what he did at RB Leipzig. And so it's probably building smaller mobile forwards and having players like Mane, and [Serge] Gnabry and [Leroy] Sane, who will be interchangeable.

"I think that's the way that Bayern will play moving forward. If you want to get a younger version of Lewandowski right now, nobody can say who exactly who that is.

"They're looking to the future and Mane is a few years younger than Lewandowski so there'll be a slightly more fluid Bayern attack - and Mane, style-wise, fits perfectly."