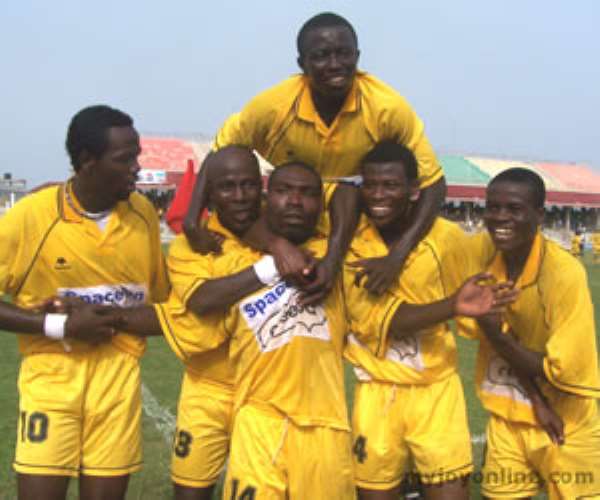 Accra, July 18, GNA - Accra Hearts of Oak laboured back to the top of the GT Premier League table with a 2-1 win over visiting Gomoa Fetteh Feyenoord in an outstanding league match played at the Ohene Djan Sports Stadium in Accra on Monday.

Hearts now occupy the top spot with 30 points, one point difference between the second club, Kumasi Asante Kotoko who suffered a shocking defeat at the hands of Tema Real Sportive last Sunday at the Baba Yara Sports Stadium in Kumasi.

The match, which many Hearts followers however thought was going to be an easy pay day for them, rather turned out to be hard task for the Phobians as they had to clinch the match winner in the dying minutes of the game.

Hearts, after taking the lead in the 14th minute of the game through skipper Lawrence Adjah Tetteh, who bumped into a cross from Saliu Muntari to beat keeper Philemon McCarthy, saw their lead cancelled in the 75th minute by Feyenoord who treated the partisan home fans with their unique brand of entertaining soccer.

The equaliser came as a result of the singular efforts of Dominic Adigah who went round Hearts Kwabena Boafo before delivering a curling shot into the net with goalkeeper Sulemana Abubakari having no answer to it.

Prior to the equaliser, the visitors had subjected Hearts to an intensive pressure but failed to make use of the numerous scoring opportunities that came their way.

The equaliser brought a temporary end to the dreams of Hearts in getting back to the top of the table until the 89th minute when Joe Tagoe's corner kick created a melee in the vital area of Feyenoord for Prince Tagoe to slot in the winner.